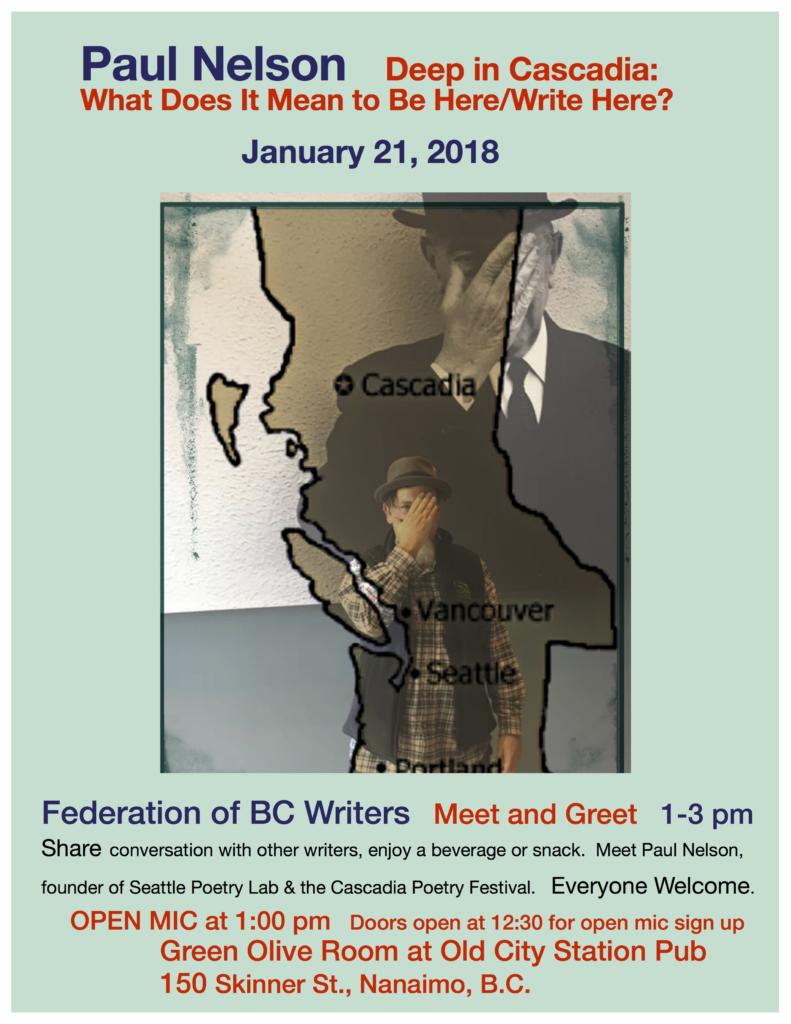 It’s been over five years since I published Why Cascadia, Why Poetry? In it I make the case for bioregionalism and poetry as part of a response to the decline of democracy in the United States, combined with the decline of the health of the planetary biosphere. Now I am preparing for a talk (see above poster) in Nanaimo, BC, as organized by Carla Stein, and a reading in Courtenay at the Red Tree reading series, coordinated by Dan Kirk and Ed Varney.

Information on the decline of democracy (& empire) is coming daily it seems, given the current “leadership” of the U.S. (I wish I had been the person to anagram the word “shithole” into “his hotel.”) Here are some stats from an article by Alfred W. McCoy on how the SCROTUS is building a wall and losing an empire:

Over the past half-century, the American share of the global economy has, for instance, fallen from 40% in 1960 to 22% in 2014 to just 15% in 2017 (as measured by the realistic index of purchasing power parity). Many experts now agree that China will surpass the U.S., in absolute terms, as the world’s number one economy within a decade.

Read on past that quote to see how dumb people think SCROTUS is. (“What a fucking idiot” – Fox News founder Rupert Murdoch) See also the news of one week in December as  former US allies makes pacts with China and Russia and countries like Germany state that US-German relations will never be the same.

Just today an outgoing Republican senator is comparing SCROTUS to Josef Stalin regarding his treatment of the press, an act the spokes-scrotus says is due to that senator’s “poll numbers.”  Even a publication like Business Insider is publishing articles saying that the U.S. has reached the “last stage before collapse.” 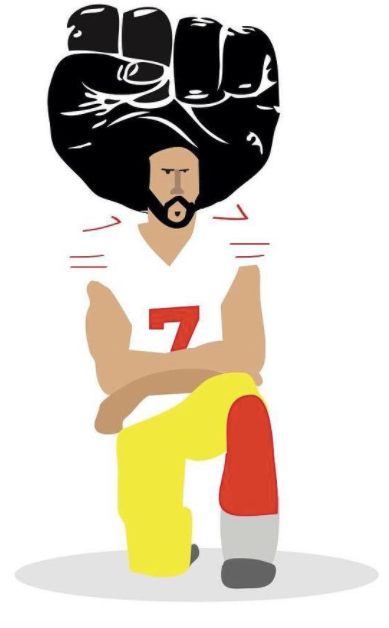 Back to the Nanaimo event. What does it mean to be here and to write here? First thing to understand is that the here must be a real, tangible place. We can say nation states are tangible, but being connected to a watershed and a bioregion is a deeper gesture that will have benefits greater than the faux religion that many U.S. Americans subscribe to, that being patriotism. (We know where this leads us. Ask Colin Kaepernick, for one. Or Maru Mora Villalpando.)

If HERE is a watershed, or a part of one, a forest, a garden, a river, a mountain or a lake, connecting to it has its own rewards, that of having a window into life itself, how it manifests, how it adapts, how it varies from day to day. Watching the sun rise out our lakeside windows, a little further north these days, or watching how the waves on the lake create patterns, or are pushed by winds, are all small soul-building activities that connect us more deeply with HERE and a HERE that will be here long after the United States are no longer united, officially. There can be no here without this activity, but endless alienation. We see where alienation leads us. To what the U.S. has now. Materialism and hostility.

In 1990, the man most associated with developing the notion of bioregionalism, Peter Berg wrote that cities needed to be re-conceptualized, and understand that they are all:

…situated in local bioregions within which they can be made self-reliant and sustainable. The unique soils, watersheds, native plants and animals, climate seasonal variations and other natural characteristics that are present in the geographical life-place where a city is located constitute the basic context for securing essential resources of food, water, energy and materials…

He argued that all cities need to find “nearby sources to satisfy basic human needs” and to “adapt those needs to local conditions.” It’s clear the poet should be on the leading edge of this understanding, fighting schemes that jeopardize our ability to move to this reality (such as how Vancouver poet Stephen Collis has put his life and career on the line to fight Kinder Morgan) as well as learn the least you should know as a poet connected with place, as Gary Snyder told us a half a century ago:

all you can know about animals as persons.
the names of trees and flowers and weeds.
the names of stars and the movements of planets
and the moon.
your own six senses, with a watchful elegant mind.
at least one kind of traditional magic:
divination, astrology, the book of changes, the tarot;…

I love how Daphne Marlatt was discussing the futility of the Vietnam War and the Tet Offensive’s siege of the Perfume River fifty years ago while imagining how life on Earth is from Pluto’s vantage point, while also having her hands in the dirt planting a garden in her poem Pluto Seen From Earth just published again in her massive new retrospective book Intertidal. This is thinking globally and acting locally over 50 years ago.

Or how Adelia MacWilliam, who has exposed herself to settler wrath and that of her family, writing about her their former land on Salt Spring Island that had ancient aboriginal burial grounds.

It is with Adelia MacWilliam that I am helping to create an event for those who want to go deeper into this place, Cascadia, and in poetics. To create an alternative to universities akin to the pre-war café culture of Vienna, as delineated by Clive James in his book Cultural Amnesia. (Referenced here.) One that reinstates the “direct observation of the café” as opposed t0 the culture that brought us “the “abstruse doctoral theses” of academics who had “the deadly freedom to write as if nobody would ever read the results.” Not that thousands, or even hundreds of people are reading any of our poems, but the quest to go deeper has its own rewards.

This is the kind of thinking that has guided me for many years in my SPLAB efforts, in the festivals that I’ve helped produce and in the interviews I’ve done since 1990, the oldest of which are finally being organized here.

This is at the core of the inspiration to be part of an event that Adelia MacWilliam, in Subud parlance “received” about having an off-year event in Cumberland, in years there is no Cascadia Poetry Festival there. (The first CPF-Cumberland happened in September 2017.) The event being planned by Adelia and I, along with SPLAB co-founder Danika Dinsmore, is being called the Deep in Cascadia Poetics Retreat and these notions are at the core of my involvement in such a project.

Cascadia was named after the effect of water falling from above, cascading down from the mountains mainly, but we can see it drop from the sky on the average day, see its approximation of neon as it drops into puddles or into a lake, or see how it is transformed from the ice of glaciers into the rapids of rivers. Water is noted in the Tao te Ching as the highest good because it gives life to the ten thousand things without striving, flowing in places men reject, making it like the Tao. Is a manifestation of the deepest compassion and, since it is so present in every day life in Cascadia, it makes the possibilities of being more compassionate more likely here. We need that now.