As I write this, the founder of Facebook is apologizing to the U.S. Congress for the data breach that is being referred to as the Cambridge Analytica scandal. Not only has the confidential personal information of 87 million people been compromised, but the “free world” has been given a reality TV show host as its leader and “most powerful man” as a direct result of Facebook’s greed. I guess “most powerful man” means the man with “control” of the world’s largest military, but you get the shorthand. Facebook business practices = El Caudillo Analfabético. This is some awful math and yet MILLIONS of people carry on as if all is well, posting their dinner photos, lost dog notices and general gripes or petitions to the “hive mind” as if all was well.

The online activist network Avaaz is protesting in D.C. via Fake Marks: 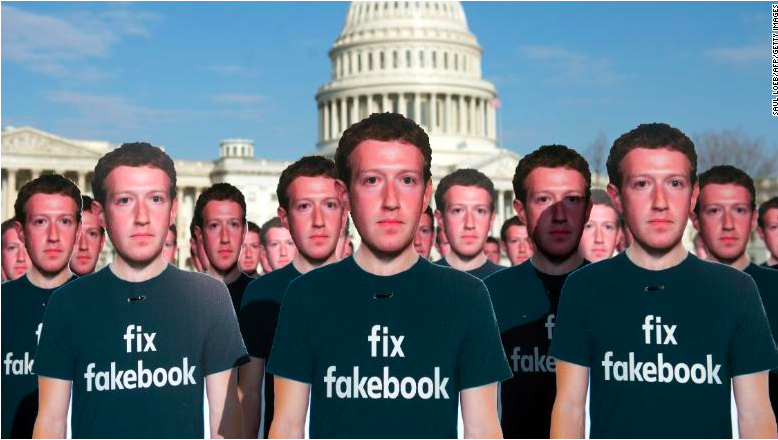 in the hope that their Fix Facebook agenda is adopted:

Of course power is not given up easily and this is all about power and money. At over $60 billion in personal net worth, there is a lot of money at stake for Zuckerberg and millions of others who benefit from the current business model of Facebook. A business model that one could categorize as Consequence-Free Capitalism. In the age of oligarchy, notions once central to this country, like revoking a corporate charter, or busting a monopoly are inconceivable.

There are those who are looking at other ways Facebook can be fixed. Tim Wu writes in the New York Times:

Another “alt-Facebook” could be a nonprofit that uses that status to signal its dedication to better practices, much as nonprofit hospitals and universities do. Wikipedia is a nonprofit, and it manages nearly as much traffic as Facebook, on a much smaller budget. An “alt-Facebook” could be started by Wikimedia, or by former Facebook employees, many of whom have congregated at the Center for Humane Technology, a nonprofit for those looking to change Silicon Valley’s culture. It could even be funded by the Corporation for Public Broadcasting, which was created in reaction to the failures of commercial television and whose mission includes ensuring access to “telecommunications services that are commercial free and free of charge.”

Of course Zuckerberg has made his mark in the world and is no doubt concerned with his legacy. And, at this point, his legacy is of a man who speaks bullshit to power. He apologizes, offers some superficial change of the business and hopes the next scandal does not come too soon while he watches his net worth exceed that of many entire counties.

If he REALLY wanted to create a powerful legacy, he’d socialize his social media outlet. That’s right, instead of a typical for-profit, gangster-capitalism company, Facebook’s profits would be split with users all over the world. Surely there is an algorithm that could be created to determine how to structure this, maybe content providers, heavy users and those with great influence on the platform would get greater shares of the revenue. Surely we could make sure Zuckerberg and the founders got enough to get by. Would $10 million be enough? I could get by on a TENTH of that. But it would be world-changing were it to happen. Nothing short of a significant switch in the business model, a breakup of their monopoly or revoking their corporate charter is going to drastically change Facebook. In the meantime, I keep track of the time I am spending on what a friend eleven years ago called “Crackbook.” I’ve downloaded photos and videos from my first eleven years on Facebook and diligently read articles about how to quit. Were it not for the promotion of literary arts events, I’d likely be gone by now. LinkedIn and Instagram are not looking so bad these days.