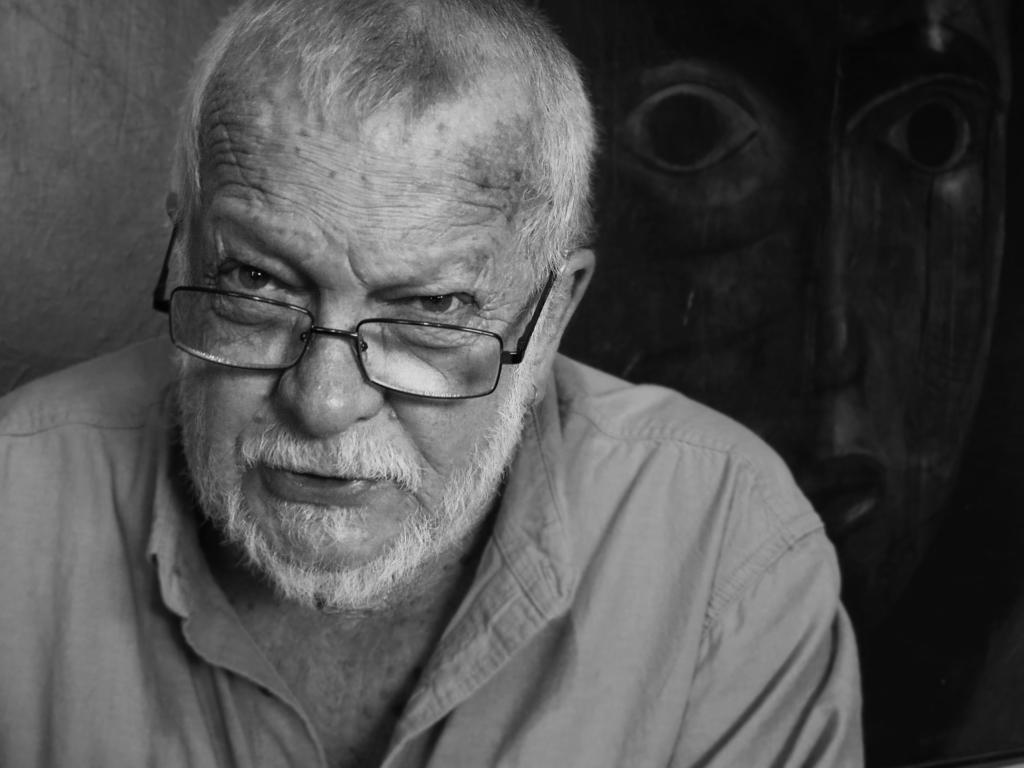 When the first poetry books from Copper Canyon Press went on sale in 1972, they were revelatory showing that the humble technology of the book could be, and indeed should be, an artifact of craftsmanship itself. Copper Canyon elevated the publishing of poetry books to an art of intrinsic beauty as exemplars of the printer’s craft. One of the driving forces behind this new guild craftsmanship was poet, editor, publisher, translator and fine printer Sam Hamill who died at his home in Anacortes, WA on April 14, 2018. Mr. Hamill was 74.

Arguably no one did more for the art of poetry in all its manifestations in the latter half of the 20th century and early 21st than Mr. Hamill. Born to a carnival fry cook at the end of WWII, Hamill was put up for adoption at the age of three by a father who felt the carnival life was no place for a child. Hamill grew up in Utah, the adopted son of educated poultry farmers who had a deep love of literature and history. As such, the young orphan was steeped in the language and poetry of Shelley, Wordsworth, Keats, and Frost by the time he reached puberty. As Hamill has said in interviews, his adopted father would lull him to sleep night after night reading the canonical poems of the English language. These would stay with him for the rest of his life.

Growing up in a home where poetry was spoken out loud, Hamill in later years insisted poetry should always begin in the ear as a spoken form imbued with the rhythm of the heart. He distrusted poems that clearly came into being on the soulless medium of a computer screen with spellcheck. The many recordings of his spoken poetry on CD and tape attest to this resonant craftsmanship that began in his tympanum as a child. Hamill has been praised by his peers for having one of the finest reading voices for poetry in the English language.

In 1973, Hamill garnered a $500 award for editorial excellence for his work on the student paper at University of California Santa Barbara. Poet Kenneth Rexroth, who taught there, had taken Hamill under his wing after the younger poet ran away from home in his late teens to find his place in the poetic renaissance of the Beats on the West Coast. With prize money in hand, Hamill became the Founding Editor of Copper Canyon Press. Tree Swenson (subsequently director of the Academy of American Poets and Hugo House) and poet, translator, author and friend, William O’Daly were co-founders.

Jim Harrison has said: “Hamill has reached the category of a National Treasure though I’d doubt he’d like the idea.” This doubtless pertains because Hamill was by his own admission forever the outsider in the high-status world of Pulitzer Prizes and academic accolades. He never sought employment in academia, instead taught in prisons. He held fast to the belief that poetry was a sacred craft irrespective of the newest trends lauded by East coast taste setters. Copper Canyon in its heyday, from the early 1970s through to the latter 1990s, published some of the finest poets in any language, including David Lee, Olga Broumas, William Stafford, Jaan Kaplinski and Nobel Laureate Pablo Neruda, in crafted books that were singularly beautiful. Its catalog was always eclectic, unique, revelatory. It is perhaps as publisher and editor at Copper Canyon Press that Hamill made his enduring mark. Hamill has been credited with single-handedly resurrecting the careers of such masters as Hayden Carruth, Thomas McGrath, and latterly Kenneth Rexroth in the seminal work in one volume, The Collected Poems of Kenneth Rexroth (2003), which Hamill meticulously co-edited. Poets across the spectrum remain indebted to Hamill for how assiduously he championed them in their formative years. He was also a renowned letterpress printer and it infused every aspect of his work.

Hamill published four books of literary prose, seventeen books of poetry, alongside many well-regarded translations and innumerable broadsides. His early collected works, Destination Zero 1970-1995, garnered sincere praise from such luminaries as W.S. Merwin, Donald Hall and Denise Levertov. Indeed, he has been acclaimed worldwide for the lyricism of his poems, perhaps nowhere with more enthusiasm than in Latin America. His poems unfold in the direct language of the spoken word, with a clear eye to the natural world. Stripped of artifice or academic embellishment, these poems have been acknowledged as some of the finest by a minor poet in the American literary canon. He was also an able and respected translator from many languages, and his translations of the great Asian poets such as Du Fu, Li Po, and Wang Wei, and latterly haiku masters such as Basho and Issa, have never been superseded. As for Hamill’s translation of the Tao Te Ching, it is said that the: “extraordinary strength is that it has captured the poetry of Lao Tzu’s original without sacrificing the resonance of the text’s many meanings and possible interpretations.”

After an invitation to the White House in the winter of 2003 by then First Lady Laura Bush, Hamill publicly renounced the invitation and founded the organization Poets Against War (PAW), which sought to use poetry to oppose the Iraq War. Within a year, many thousands of poets had published anti-war poems on the PAW website, and a bestseller of selected poems was put out by The Nation Press under the same name. It inspired a worldwide movement of films and festivals dedicated to the poetry of pacifism. While this act of literary rebellion put Hamill squarely in the national zeitgeist, in later years he was to lament that PAW seemed to overshadow his lifelong vow to the art of poetry, to his own work as a fine poet, translator, publisher and printer. Overlooked were his twelve years as editor at the American Poetry Review or that he had served thirty years with the Port Townsend Writer’s Conference in Washington, including 10 years as their Director. In the wake of his nationally covered protest, the east coast establishment seemingly ignored all this modest poet had done for poetry spanning a fifty-five year career. To the end of his productive life, Hamill remained a fiercely independent and outspoken poet.

Hamill’s quiet generosity transformed the lives of many individuals. He never hesitated to help those in need, whether it was a gift of knowledge, time or means.
Hamill received many honors and awards, including NEA, Guggenheim, The Andrew W. Mellon Foundation, The Lila Wallace – Reader’s Digest Fund, and Woodrow Wilson Foundation fellowships, The Stanley Lindberg Lifetime Achievement Editor’s Award from the Rainier Writing Workshop – Pacific Lutheran University, Lifetime Achievement Award in Poetry from the Washington Poets Association, two Washington State Governor’s Writers Day Awards, the First Amendment Award from PEN USA, a US Japan Friendship Commission Fellowship, and was awarded the Decoración de la Universidad de Carabobo in Venezuela. Hamill is predeceased by his wife of many years, the painter and artist Gray Foster.

Hamill is survived by his daughter, Eron Hamill and her husband Roger Mah of Richmond, BC and by his partner, Juniper White. As Hamill wrote in his introductory poem of Destination Zero: “It is enough, perhaps/ to say – We live here/ And let it go at that.” In the case of this wise poet, a poignant truth.