In planning for the Becoming Cascadian weekend May 31-June 3, 2018, the model used by my spiritual community (Subud) for its annual kejiwaan gathering is key. A very democratic affair in which there is an opening and closing circle which every attendee is welcome to speak and breakout sessions which are proposed by attendees and selected and slotted via voting.

I know of one breakout session to be offered and that is by Mark Gonnerman. He’s working on the wording, but an early version is: Living-in-Place with Peter Berg & Gary Snyder in Mind. Peter Berg was the man most responsible for fostering the notion of bioregionalism and Gary Snyder one of the world’s most accomplished living poets. 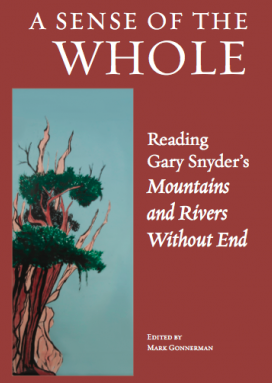 Gonnerman grew up in Northfield, Minnesota and attended Harvard Divinity School. As a Lieberman Fellow, he completed his Ph.D. and was founding director of the Aurora Forum at Stanford University. Married to Meri Mitsuyoshi, he is a teacher and independent scholar based in San Jose, California and is the author of:

A Sense of the Whole: Reading Gary Snyder’s Mountains and Rivers Without End. I just started reading this and dig this paragraph:

If Mountains and Rivers has an overriding purpose apart from the aesthetic pleasures it provides, it is to engender a conversation in the heart-mind of the reader. The desired shift in this case is from identification with outmoded nation-state systems to participation in local community life, from centralized hierarchy to decentralized collaboration, from the stresses of competition to the satisfactions of mutual regard and cooperation, from modern monocultural monotheism to promiscuous postmodern polytheism, from consumerism to conservation, from fragmentation to a sense of the whole. This shift may begin in the very activity of reading. How one reads affects what one learns and, for many, reading has become just another consumer activity. The Mountains & Rivers workshop was organized in large part as an effort to curtail (if only for a moment) consumerist habits of reading that are now widely taught and reinforced in ways that eclipse the importance if not the existence of other reading modes . . .

Gonnerman goes on to differentiate consumerist reading and reading as meditation, an “approach that expands awareness and deepens insight.” And you have the kind of material that we’re looking for with the Becoming Cascadian retreat and others coming up, including Deep in Cascadia in Cumberland, BC, which is a sold-out affair.

Add Andrew Schelling to this weekend, and you have incredible depth of experience and knowledge of poetry, poetics and place. Andrew’s bio:

Andrew Schelling is a poet, translator, and essay writer. He has published twenty books, including seven of translation from India’s early poetry. His own work encounters the rhythms and features of the natural world, as well delving into linguistics. Recent titles are From the Arapaho Songbook and the folkloric study, Tracks Along the Left Coast: Jaime de Angulo & Pacific Coast Culture. Schelling lives in the Southern Rocky Mountain Ecoregion and teaches at Naropa University