A Time Before Slaughter/Pig War: & Other Songs of Cascadia

The tenth anniversary edition of A Time Before Slaughter is coming out on April 11 with a launch at Open Books. My publisher, Apprentice House, is adding a whole separate book to the new edition, Pig War: & Other Songs of Cascadia. Today I answered questions for the press to help enable marketing efforts. Here is that questionnaire:

AH: What inspired you to write A Time Before Slaughter and Pig War: & Other Songs of Cascadia?

peN: Reading Paterson by William Carlos Williams and The Maximus Poems by Charles Olson showed me that the history of a small town was the micro-history of the U.S. with all of the larger themes of colonialism, white supremacy and ecocide illustrated in examples from that local history. Then, learning about bioregionalism and how that provides a deep ecopoetics foundation for a poetry project motivated me to learn about and re-enact in experimental lyric (serial form) poetry some of the history of Cascadia, including the Pig War of San Juan Island.

AH: Have you always wanted to be a writer/poet?

peN: No. I was a broadcaster for 26 years and knew at age 13 I wanted to be in radio. But halfway through that career, reading poetry as bedtime stories to my older daughter Rebecca Rose helped me see the power of the New American Poetry and made me want to practice. Also, interviewing poets like Allen Ginsberg, Michael McClure, Diane di Prima and many others gave me the ideas and examples of commitment that provided early inspiration.

AH: How is A Time Before Slaughter/Pig War different from your other poems/writing?

peN: ATBS/PW&OSoC is very much a re-enactment of bioregional history in serial, experimental lyric (projective) verse. There is a commitment to researching the history of this bioregion and using that as raw material for poetry.

AH: What is a benefit to learning about history through poetry rather than other forms of writing?

peN: It’s not as dry because poetry (when noetic) is a method of learning as valid as any other discipline. It affects the reader/listener in a way that rhetoric cannot. Serial form allows themes to be developed and re-stated from different angles to illustrate issues in the way Emily Dickinson suggested “tell the truth but tell it slant.” History done in poetry has no other agenda than to tell the truth as best as the poet can discern it in the moment rather than to prove a point or win an argument or buttress a need for cultural dominance.

AH: Why do you think it is important for people to read poetry?

peN: Poetry that is noetic, is a method of learning as valid as any other discipline and it impacts the reader/listener on a different level than rhetoric. It makes space for the reader/listener, invites them in to be a co-creator in creating meaning. Rhetoric does not do that and much poetry today is rhythmic rhetoric. And almost every other form of communication, public speech, political speech, corporate propaganda, tweets, are all rhetorical propaganda and attempt to communicate to the smallest part of ourselves. Poetry goes much deeper than that and is satisfying to read because of that, when it is done well.

AH: Has your book sparked any new interests or passions? Is there anything you learned through your writing process?

peN: Oh yes. I have learned so much about history, so much about my own story, my own personal mythology because (in part) I live by the notion of William Carlos Williams that each poem should be a summary of a poet’s life up to that point. My own personal myth, in relation to the material I engage, gives me perception into my own issues and how they dance with the cultural issues as experienced through the history of this bioregion. I also agree with Charles Olson who said that “people don’t change, they only stand more revealed. I likewise.” Olson also said the content changes when you write projectively and so one’s own issues, one’s own personal mythology becomes more clean (& more revealed) when one has a discipline in writing projectively.

AH: What do each of the titles mean?

peN: A Time Before Slaughter suggests that there was a time, and there could be a future time, in which human beings lived as if we understood the inherent interconnection of all living things. In fact, extra suffering is the only outcome for not living as part of an inter-connected whole and daily we see the suffering of the very planetary biosphere that sustains life at this time. So, in reviewing the culture of the last people who lived here sustainably (& through the WWII experience of incarcerated Japanese-Americans) we can learn how to live sustainably in the future, deeply understanding place and taking our cues from it and from the marginalized groups and the critters who have made this place their home.

Pig War: & Other Songs of Cascadia is centered around the Pig War, which happened on San Juan Island (1859-1872) and in which the only casualty was a pig. Why is this one of the few war opportunities the U.S. did not pursue? Is it something in the soil of this bioregion that gives compassion and non- violence a better chance than in other bioregions in North America? Also, the fact that our bioregion, Cascadia, involves two sovereign nations (and many indigenous nations) is an important distinction.

AH: Can you tell us more about the poetry organizations you are involved in?

peN: SPLAB (Seattle Poetics LAB) The Seattle Poetics LAB (SPLAB) works to reestablish poetry as a method for knowing self & place by engaging poets, writers and artists bioregionally in Cascadia to build community through shared experience of the spoken & written word.

AH: What is the difference between Epic poetry versus regular poetry? What made you decide to write in the epic style?

peN: I prefer the term “serial.” Serial form allows for themes to be explored, re-explored from a different angle and to develop “provisional conclusions” that are always open, always ready to be revised and stated with more precision, creating a mosaic in language that can communicate on a much deeper level than rhetoric and most conventional poetry. It enables the prophetic voice because it taps into energy sources that are the source of the prophecy. Writing projectively and in serial form are method to engage the prophetic voice in the “practice of outside” and seriality has been for me the most open of all literary practices. I am convinced it is a soul-building practice.

AH: Are you working on anything else?

peN: Yes, A series of daily 17 syllable poems (see the Apprentice House book American Sentences.) A series of prose sonnets, Sonetos de Cascadia. An ongoing series of interviews, American Prophets: Interviews 1994-2012. The Cascadia Poetry Festival, part of a 20 year bioregional cultural investigation. I have a book of postcard poems culled from the 13th year of PoPo: The August Poetry Postcard Fest and we are registering poets for year 14. I have several unpublished manuscripts and working on healing a pressing health issue.

AH: Can you tell us about your Cascadia bioregional cultural investigation?

peN: It started in 2012 with the first Cascadia Poetry Festival and we’ve conducted 6 such fests and are producing the 7th in May 2020. I’m also doing interviews with poets, indigenous leaders and whole-systems activists, mostly from Cascadia, about the nature of this bioregion as a place where water (in the Buddhist tradition) illustrates a model of being in the world by taking no shape, being pliable, but also being strong enough to split rock. That water is ever-present here, often falling from above, either as rain, or down from a higher place, provides a daily model for the surrender to larger forces.

AH: Thus far, what has been your greatest success in your career?

peN: Seeing my daughter Rebecca Rose become a successful journalist and journalism professor at Columbia University feels like the best thing I have ever done. Winning the Robin Blaser award from The Capilano Review was special, given that prophets are never accepted in their home town and that review is in Vancouver, BC. Finding myself living on the edge of Lake Washington, being able to write every day, partnered with a remarkable human raising another daughter free from a soul-sucking corporate job seems like the best possible validation for me. May it continue. 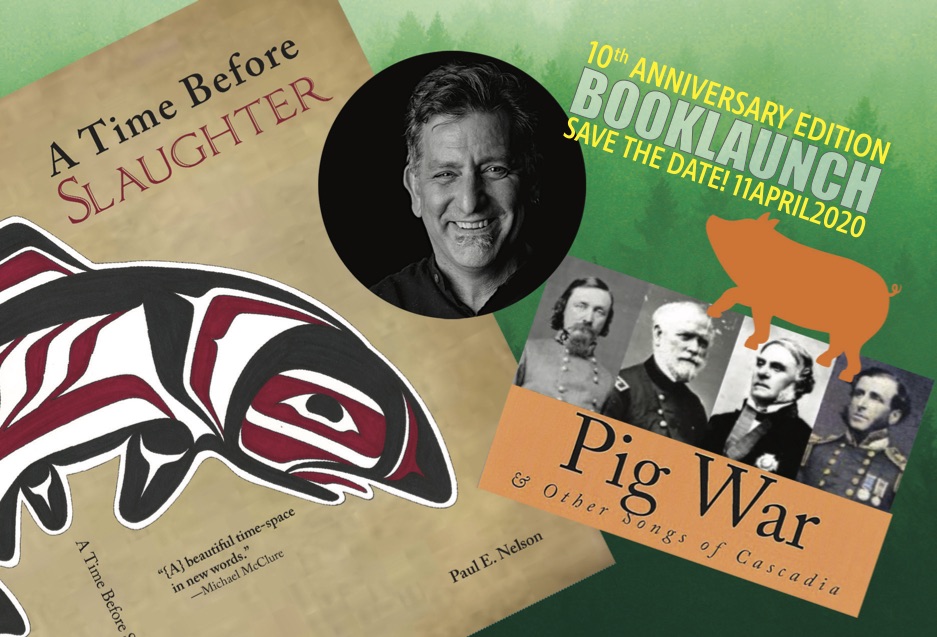 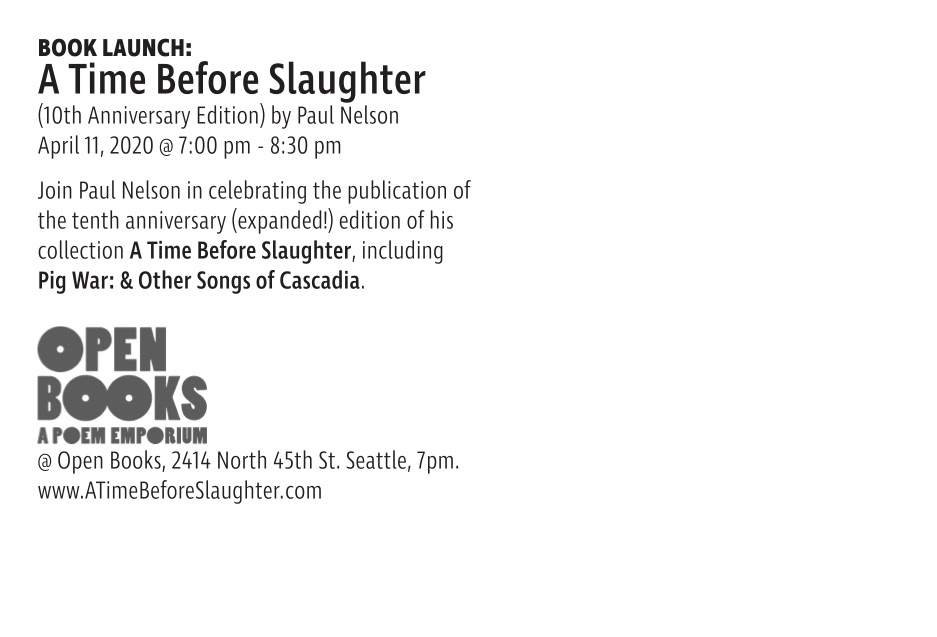