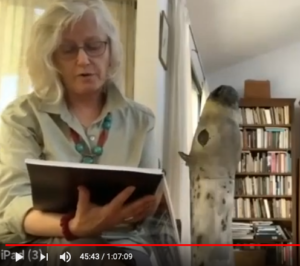 The Undercommons is a literary salon that was founded a few months ago, happened in person once a month a few times and has moved to Zoom for the time-being. We’ve studied Denise Levertov and The Objectivists, among others and had a chance on Memorial Day to honor the memory of Michael McClure. We were blessed to have Michael’s partner for 34 years, Amy, join us and read unpublished work from Michael’s Mule Kick Blues as well as a poem Diane di Prima wrote for Michael the night he died. Other friends and fans of Michael chimed in from as far as Victoria, BC and Morocco. Matt Trease and Saundra Fleming are two of the other folks involved in running the Undercommons and Matt handles the announcements. Ping us if you’d like more information on the monthly literary discussion, but meanwhile, enjoy:

The Undercommons on Michael McClure
May 25, 2020 Memorial Day via Zoom

Michael McClure (October 20, 1932 – May 4, 2020) was an American poet, playwright, songwriter, and novelist. After moving to San Francisco as a young man, he found fame as one of the 5 poets (including Allen Ginsberg) who read at the famous San Francisco Six Gallery reading in 1955, which was rendered in barely fictionalized terms in Jack Kerouac’s The Dharma Bums. He soon became a key member of the Beat Generation and is immortalized as “Pat McLear” in Kerouac’s Big Sur.

“McClure always, and more and more as he grows older, gives his reader access to the verbal impulses of his whole body’s thought (as distinct from simply and only brain-think, as it is with most who write). He invents a form for the cellular messages of his, a form which will feel as if it were organic on the page; and he sticks with it across his life …” (Wikipedia)

How I met Michael…

Touching the Edge (back cover)

Playwright: The Beard, Josephine the Mouse Singer. (JtMS is a treatise on Projective Verse.)