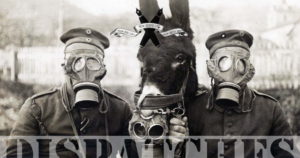 Dispatches from the Poetry Wars was a great little, shit-stirring website that reminded us that poetry wars are ongoing and critical, if they lead to dialog. Community happens only when there is real dialog and I feel like Dispatches was a community. Still is, in many ways, though they have stopped posting new material as of last month.

One effort they DID make was to attempt to hold The Poetry Foundation accountable. The huge and lavishly-funded (can I write “hugely-endowed?) operation is responsible for the legendary Poetry Magazine, founded in 1912, and a huge downtown Chicago headquarters built with a huge donation from a pharmaceutical heiress. (Did I uss the word “huge” enough in that sentence?)

In response to the shelter-in-place guidelines created to slow the novel Coronavirus, Dispatches called out what they felt was an insufficient response from The Poetry Foundation, and urged readers to sign a petition designed to garner more support for poets in need, along with poetry (& other independent) bookstores and small poetry organizations. You can see their post here: https://www.dispatchespoetrywars.com/dispatches/dispatch-49-ubi-es-poetry-foundation/ and get some sense of it with this: 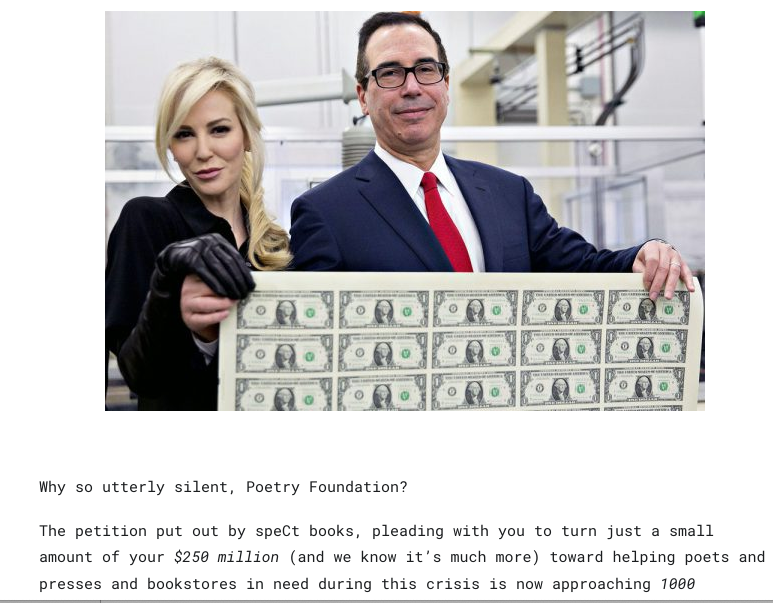 Yesterday, Dispatches sent out this email:

The NYT has published an article today on the open letter to the PoFo by former Fellows and Contributors. 1,800 people have signed it so far, amazingly enough… it is a good sign, indeed, that there’s a sudden and righteous contempt aimed at this corrupt institution. We were the first to say it and quite some time ago, so we certainly agree with the call of the letter: Boycott the Poetry Foundation.

The NYT article ends with a link to the Chicago Tribune article about the original speCt books petition (now itself approaching 2,500 signatories), in which Dispatches is mentioned, with quotes from Mike Boughn. https://www.nytimes.com/2020/06/09/books/poetry-foundation-black-lives-matter.html

It’s well worth reading to get some sense of the corporate culture that runs The Poetry Foundation. (Contrast that with SPLAB’s 2017 “Statement of Openness and Inclusivity” which holds up well at this time.)

Culture was at the core of an essay I wrote while doing grad work on my own line of poetry inquiry. Go back to 2006 and an essay I saw about The Poetry Foundation by Steve Evans entitled Free Market Verse.  I remember being vaulted into a response which I hammered out in a couple of hours. Of course on some level it had been incubating a long time, but my essay was entitled:

Here is a key section from that essay, alluding to some of the key players at The Poetry Foundation in 2006:

…for [Dana] Gioia, [John] Barr, [Ted] Kooser, et al., the modernist paradigm has been successful. They have learned and perfected the ability to succeed financially in a modernist world. It is the only thing they know and everything they choose to read reinforces it. It’s interesting to see how the Poetry Foundation, after getting the Lilly dollars, changed its name from the Modern Poetry Association, and yet it is Modernist Culture that Barr represents and seeks to perpetuate. A culture that, according to Paul Ray and Sherry Anderson, has a stand-pat stance toward reality (Ray, Anderson 82). We’re basically on the right track, these cultural modernists believe. We just need to spend more money, or work harder and free-market capitalism will triumph.

Let’s examine this same stance toward wellness. A modernist medical perspective may have an unofficial motto of “find the bad part and kill it.” Look at how modern medicine deals with cancer. It attempts to use early detection to find the cancerous cells, isolate them, and kill them off with drugs, surgery or radiation. It’s not subtle and there are cells and organs that suffer collateral damage through chemotherapy and side effects of very powerful medicines. This kind of medicine is heroic and does not value the refined consciousness of kinesthetic intelligence, nor the early warning system of a more holistic approach like acupuncture, which detects Qi blockages long before a disease state manifests. Of course The Lilly Foundation was created by this Drugs, Surgery and Radiation mentality, so it was good for them. After all doesn’t EVERYONE want to be rich?

Dana Gioia shows his true colors when he seeks to recreate competitive “recitation bees,” so that it is not the imagination that is valued, but the ability to Sit, Git and Spit, or take in facts and information and regurgitate them, not unlike a mother bird feeds chicks.

I’d probably write the essay a little more clarity 14 years later and glad TPF is getting some rightly-deserved heat, but let’s just say that my little essay from 2006 holds up pretty well and I am glad my graduate advisor Frank Trocco gave me good feedback after I wrote it. That gesture helped ease the rest of my grad work giving me some confidence and momentum. Thanks Frank.