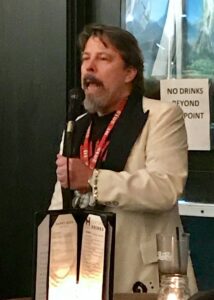 I met Hamish Todd the first time I went to Red Sky Poetry Theater. I used some language in a poem that was a little outside the regular open mic fare, but he got it and gave me a kind word. That was 1994 and I was new to poetry. Hamish was a fixture at the intersection of Grunge and poetry and he did a wonderful job as emcee for a late night reading at our 2017 Cascadia Poetry Festival in Tacoma. He invited me to be part of his podcast and on Tuesday, May 18, 2021, the anniversary of the Mt. St. Helens eruption we talked about my poems, his poems, that suit and other sweet things from a literary angle. I see Hamish as a street poet and love his work. I look forward to hearing his podcast, but in the meantime, enjoy: