Last night (Friday, May 3, 2013) I attended the Kwame Dawes reading at the Seattle Asian Art Museum. I was invited twice to the event, the second invite coming a few days before and though I was not familiar with Dawes’ work, I decided to attend. The auditorium in the Asian Art Museum is beautiful and I’ve been to many great events there over the years. And these events are always attended by other poets and I enjoy the company of most other poets. Judith Roche, Karen Finneyfrock, Tara Hardy, Sierra Nelson, Rebecca Hoogs and others were part of the gathered.

Poets from Youth Speaks were given the chance to open the evening with a poem each. Sara Brickman, a Copper Canyon Press intern, has been working with them. It’s been said that if you’re still writing poetry at 40, you’re a real poet and of the four, it seemed like Emily had the best chance for that possibility. Her use of compound adjectives, run-on style, like early Ginsberg when he was still under the heavy influence of Jack Kerouac, was impressive and a cut above the others. (Marble bag skin-spilling bloody pulp nights like that or you’re the Siamese twin bite-me responding pop goes the suicidal thought of the possibility of your vanishing…)

It is interesting to see how Youth Speaks has evolved in Seattle over the years. SPLAB brought a Slam team to the Youth Speaks 2000 National Teen Poetry Slam Championships in San Francisco, with coaches Tim Sanders and Paula Friederich, and team members Angela Dy, Raphi Soifer, Nicole Bade and Ben Warden. A complete review of the evening of the Slam and the visit to the Bay Area was written at the time by poet/critic Jack Foley and is archived here: Part 1, Part 2. Angela Dy was instrumental in getting a Youth Speaks chapter in Seattle after that trip and it’s good to see it continue. 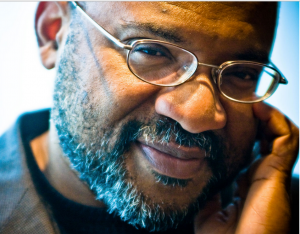 Kwame Dawes was next. It was his first time reading in Seattle. He’s the author of 17 books of poetry and numerous titles in other genres. His latest poetry collection is Duppy Conqueror: New and Selected Poems, published by Copper Canyon Press. Currently he’s the Glenna Luschei Editor of Prairie Schooner at the University of Nebraska, where he is a Chancellor’s Professor of English, a faculty member of Cave Canem, and a teacher in the Pacific MFA Program in Oregon. He is co-founder and programming director of the Calabash International Literary Festival, which takes place in Jamaica in May of each year. One of the cool things about him is that he is an Emmy-winning poet.

I especially enjoyed the fact that he is a reggae scholar and was raised in Jamaica. Ella and I have been dancing to Peter Tosh, Black Uhuru and Bob Marley in the kitchen recent mornings. In a poem about the atrocities in Rwanda, he said: Every ax should have an eye to see the havoc that it wreaks. I wrote an American Sentence for him: