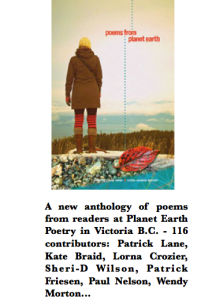 I had a poem published in the anthology culled from featured readers at the Planet Earth Poetry reading series in Victoria. Yvonne Blomer, the series curator and co-editor of the Poems from Planet Earth anthology yesterday wrote to contributors:

I hope you have all had a great summer and are slowly gearing into fall.  Planet Earth Poetry begins next Friday the 20th with our MSF/Doctors Without Borders fundraiser night/book sale and all open mic. I hope some of you can make it. If you do, bring a poem by a poet other than yourself.

In October I will be presenting Poems from Planet Earth at the BC Teachers of English Language Arts conference in Delta, BC.  I will be sharing with English teachers ways of presenting poems and writing exercises to students  through poems written by poets living in the world today.

My plan is to present poems from Poems from Planet Earth with insight into how the poems works as well as exercises created from some of the poems in the book.   The participants will have several opportunities to read poems and do writing exercises that can be easily adapted to their classrooms for their students.

I am writing to all of you in the hopes that some can participate by doing the following, if you are interested.  I’d like to present to participants a package created by some of the poets in the anthology where they have taken their poem and offered some insight to Secondary School Students about:

1. where the poem came from?

2. decisions you made around form/content/line breaks and language

3. how long you took to write the poem? (this is a common question from HS students)

4. what was the editing process? (often students believe the poem appears complete on the page in the first draft).

If you are interested and have time please send me your notes, as attachments, to this email address by October 1 (so that I can compile and use some of your ideas for my presentation).

I totally understand if you are not interested in participating, but would be delighted with any input. 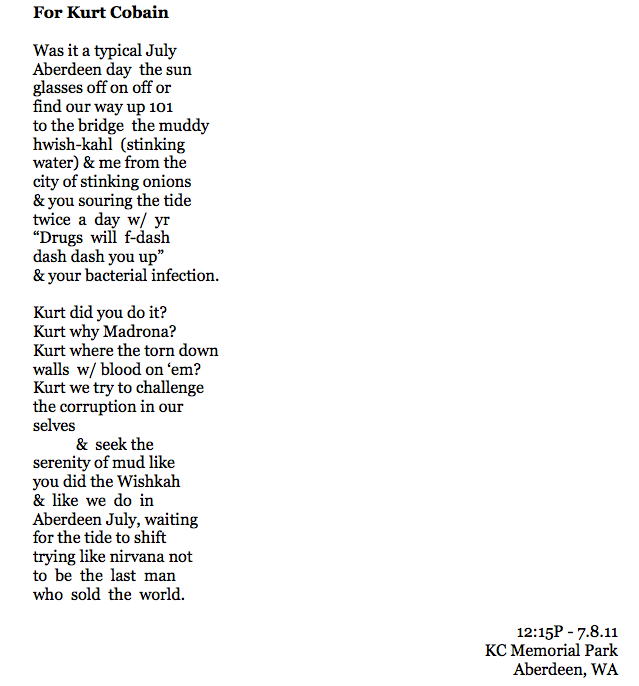 The poem came from a visit to the Kurt Cobain Memorial in Aberdeen, Washington. It is similar in tone to a poem I wrote for Frida Kahlo while attending a exhibition on photographs of the late Mexican painter. I enjoyed Nirvana’s two main albums, as well as the Unplugged record and was very troubled by the way in which the singer died. I drive by the house in which he did that almost daily, though they have torn down the barn/garage in which that happened. The original (First Person) name for the river was included in the poem, the similarity to the meaning of the name of my home town, Chicago, the censorship of the quote used, a reference to the key some on the Unplugged album (the Bowie cover) and the rumor that Cobain’s death may not have been a suicide, a belief of many fans, were all referenced in the poem, among other things.

2. decisions you made around form/content/line breaks and language

The line breaks were restrained by the size of the page in the pocket notebook I carry, in which the poem was composed. Most lines are 5 to 8 syllables, with the exception of lines 20 and 21 which is kind of a fulcrum for the poem. I try to be more creative on the page than always have the poems justified on the left hand side, hence the layout at this point of the poem, plus the content demanded it. There is a shift at this point. While Cobain decided suicide was the way out, those who are troubled by world or personal events would do better to seek a sacred place like the spot Cobain often visited to take in the solace that nature can provide and live in integrity. This is one take on the poem. Suicide is never an answer, as I believe we’ll only reincarnate with the same kinds of issues we left in the previous lifetime.

3. how long you took to write the poem? (this is a common question from HS students)

It took about 20 minutes.

4. what was the editing process? (often students believe the poem appears complete on the page in the first draft).

It was written as a first draft. I tend to compose that way, have taught myself an organic mode of composition. The process of learning how to write like this took about 15 years and I am still learning.