It has been over a year that I have been attending open mic events regularly again. I once described myself as an “open mic addict” but did not realize that Red Sky Poetry Theater was an exception, not the rule, regarding such events. & so faced with time limits (one open mic had a SPACE limit, one PAGE of text) I have to look deeper than the last poem I wrote. The main open mic I have been attending is the Words and Music at the Wedgwood Ale House on the 2nd Mondays of the month, led by Peter Munro.

The vibe of an open mic is always influenced by the emcee and the featured reader and this is a reflection of Peter, who is a serious writer and is working to improve the quality of the open mic experience for all involved. Attending regularly for me means reading different work every time. I am not keeping track with any system, only with memory (a dangerous method) but I have been good so far. 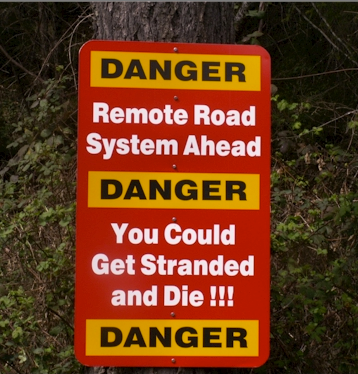 Last Monday I read a recent haibun and an old haibun. I read the old one first and was plunged back into a moment from a couple of years ago when Meredith and I (pre-Ella) took a trip just east of the Cascades to Crater Lake and then west and back up the coast. We drove west on Bear Camp Road, which is referenced in the poem below. Having been lost in the woods before, I feel especially close to such events as described in the poem, though the laughs Monday night at the end of the poem suggest few people have come close in the wilderness to be able to see that I was serious as a heart attack, not trying to trivialize the wilderness experience gone awry.

So this is a Cascadia poem, a poem from the series Haibun de la Serna and a travelogue. As always, comments are welcome. (pdf) 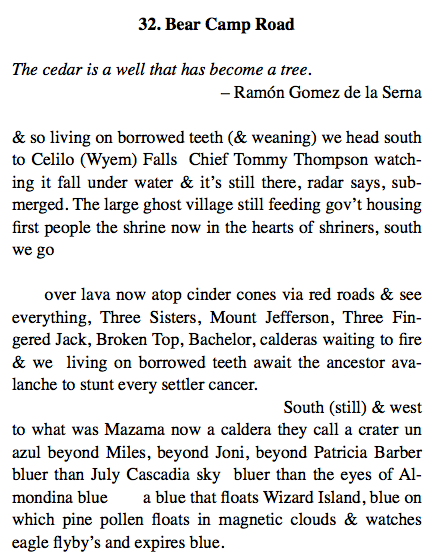 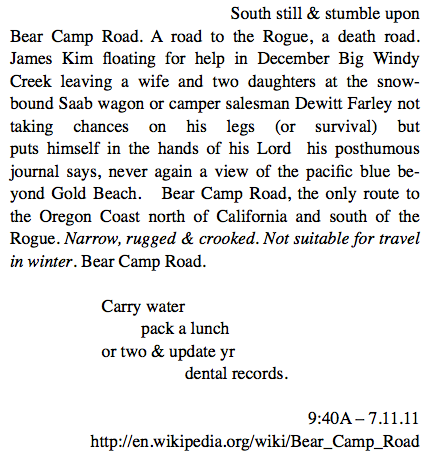