As a parent of two healthy, intelligent and beautiful daughters, I would not want to imagine the pain of having to bury one of them. I am honored to be a part of an ACLU event  Saturday night which features a poet from Mexico who lost his own son to the drug violence in his country. Time Magazine wrote this about Javier Sicilia: 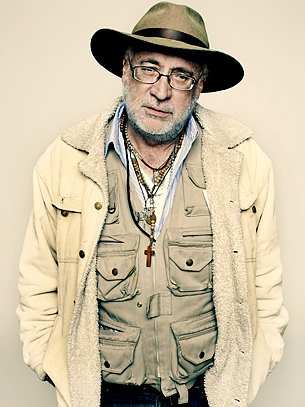 When Javier Sicilia’s 24-year-old son, health-administration student Juan Francisco, was brutally killed by drug traffickers in March, it was headline-grabbing news, because Sicilia, 55, is one of Mexico’s best-known authors and poets. But the tragedy made Sicilia realize how all too anonymous most of the 50,000 victims of Mexico’s bloody drug war have been. Believing that President Felipe Calderón’s five-year-long military campaign against Mexico’s narcocartels has simply exacerbated the violence, he created the Movement for Peace with Justice and Dignity — which is informally and popularly called Hasta la Madre! or Fed Up! — to push for a stop to the mafia bloodshed and for new anticrime strategies and reforms. The ranks of its rallies and marches quickly grew from hundreds to hundreds of thousands, culminating in a June caravan through a dozen cities, where families held up pictures of slain relatives. By giving names, faces and voices to Mexico’s drug-war dead, Sicilia helped prod Calderón to a conference at Mexico City’s Chapúltepec Castle over the summer to discuss the kind of modern judicial institutions and social investment that Mexico’s political class has too long ignored — but which may be the only way to end Mexico’s narco-nightmare.

My poetry project Pig War & Other Songs of Cascadia is, in part, an examination of how peace broke out and cooler heads prevailed in the late 19th century boundary dispute between the U.S. and Great Britain over the jurisdiction of San Juan Islands. I will read two poems from that collection which go into the Spanish exploration (& decision NOT to try to colonize Cascadia) and how the Pig War stopped its casualties at one pig. This should be a remarkable event. Details: 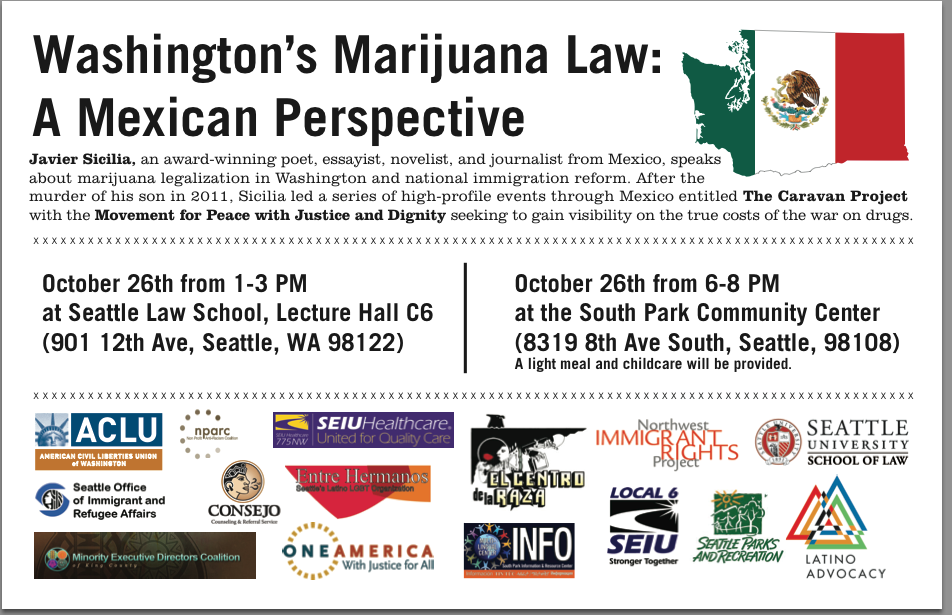 Luis Moscoso has represented the 1st legislative district since 2010. He has been an advocate for social justice all of his life and is a champion of Prevention/Intervention legislation for youth anti-violence and gang issues. He organized the Snohomish County Citizens Committee for Human Rights, was an organizer and former Board Member of NAACP- Snohomish County and a founder of the Communities of Color Coalition (C3) of Snohomish County.

Cynthia Sanchez is a Chicana poet born and raised in Washington. She graduated from the University of Washington. She has been writing poetry for nine years. Her poems are written in English, Spanglish, and Spanish. Mexican traditions, Catholicism, and the heartbeats of being una mujer weave her poems together.

Tara Hardy, author of Bring Down the Chandeliers by Write Bloody Press, is the working class, queer poet who founded the Bent Writing Institute. She is a former writer in residence of Richard Hugo House, Hedgebrook alumna, and was voted Seattle Poet Populist in 2002. Tara has been an activist in liberation movements since she was big enough to sit on her father’s shoulders at union rallies in Detroit.

Paul Nelson founded SPLAB in Seattle and the Cascadia Poetry Festival. He is the author of Organic Poetry (essays), a serial poem re-enacting history, A Time Before Slaughter (shortlisted for a 2010 Genius Award by The Stranger) and Organic in Cascadia: A Sequence of Energies. His work has been published in Golden Handcuffs Review, Zen Monster, Hambone, and in other journals and online magazines. He lives in Seattle with his wife Meredith and youngest daughter Ella Roque.

Teresa lost her firstborn son to a brutal drug-related crime in 2010. He was attending college in Mexico City and murdered inside of his own apartment. A practicing artisan, Teresa now participates in the Move- ment for Justice with Peace and Dignity mobilizations and says they have allowed her to carry on with life since her tragic loss.