I was the emcee one year at the Bumbershoot Literary Arts stage, 1999, back when that stage and the small press fair was the unofficial kickoff of the Seattle literary arts season. After a short summer of being outdoors, the first Red Sky Poetry Theater open mic of the new season happened back the each year at Bumbershoot, the poets would reunite and prepare to bear down for the rainrainrain season and this annual event was our cue. In 1999 I got to introduce the poets and writers at the festival. Jack and Adelle Foley did their choral poetry which impressed me a great deal. And then there was this huge black woman with fat dreads named Wanda Coleman. I’d not read her work and when she got to the stage there was a huge crowd gathered. They were there not to hear her, however, but the act following her, a slam poet named Saul Williams.

Wanda performed with a ferocity that I’d never seen in poetry performance before that. The subtext of her performance was in keeping with her own personal mythology, which was that she felt underrated, under-appreciated. Well, she was going to make sure that she would be a tough act to follow, and she was. To his credit, I got the sense that Saul felt he should be opening for her, but for the whims of fate, had a bigger audience. He even forgot his lines, apparently a rare occasion for him no doubt (in my mind) related to the power of Wanda’s performance and the situation.

A year later I would welcome Wanda to Auburn to teach a workshop at SPLAB, go into Auburn High to talk to students and to give a reading at SPLAB, one of two readings there of which she would be a part. Michael McClure in a conversation about Wanda said that she might not like the comparison, but he felt like she was to poetry what Howlin’ Wolf was to Blues.

An email interview on her take on an old form, American Sonnets, is here.

And clips from our 2000 interview are here:

1. On L.A. artistic milieu after Watts riots
2. on her role as Griot or Medium
3. On how writing for Days of Our Lives helped her become a better poet
4. on American Sonnets process
5. (poem) What do to About Billie Holiday
6. Jazz Poetry
7. (poem) For The Sake of the Cool
8. Child of Whitman and plight of the artist in USAmerica

We miss you Wanda. From Mercurochrome, American Sonnet #96:

now that the gates of hell have slammed,
i am seized and surrender my terrible squawk. 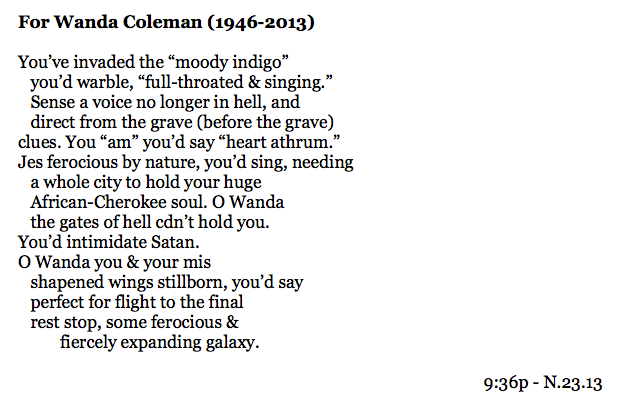