Our recent family road trip to Southern California (or SoCal as the car ads and meteorologists there say) and back had its share of beauty and difficulty. My Cousin Steve O’Connell gave us a week at his time-share condo in Dana Point and we regularly had sunsets like this: 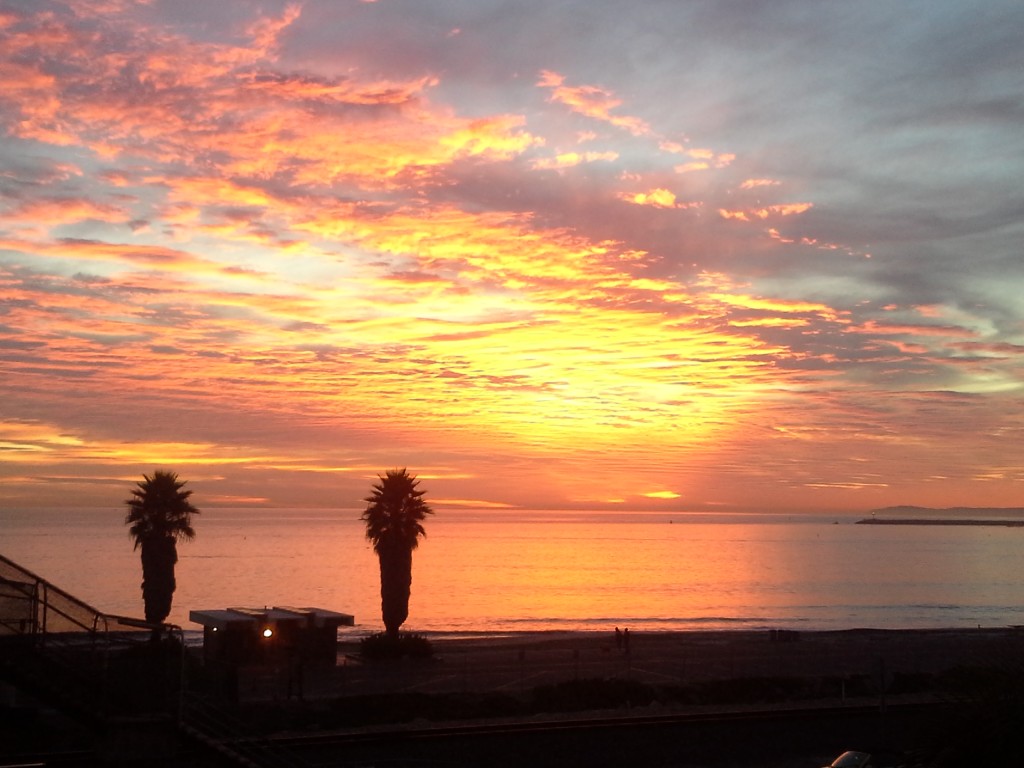 And our first visit to Joshua Tree National Park was stunning, as Mer got the chance to practice one of the things she loves best, photography: 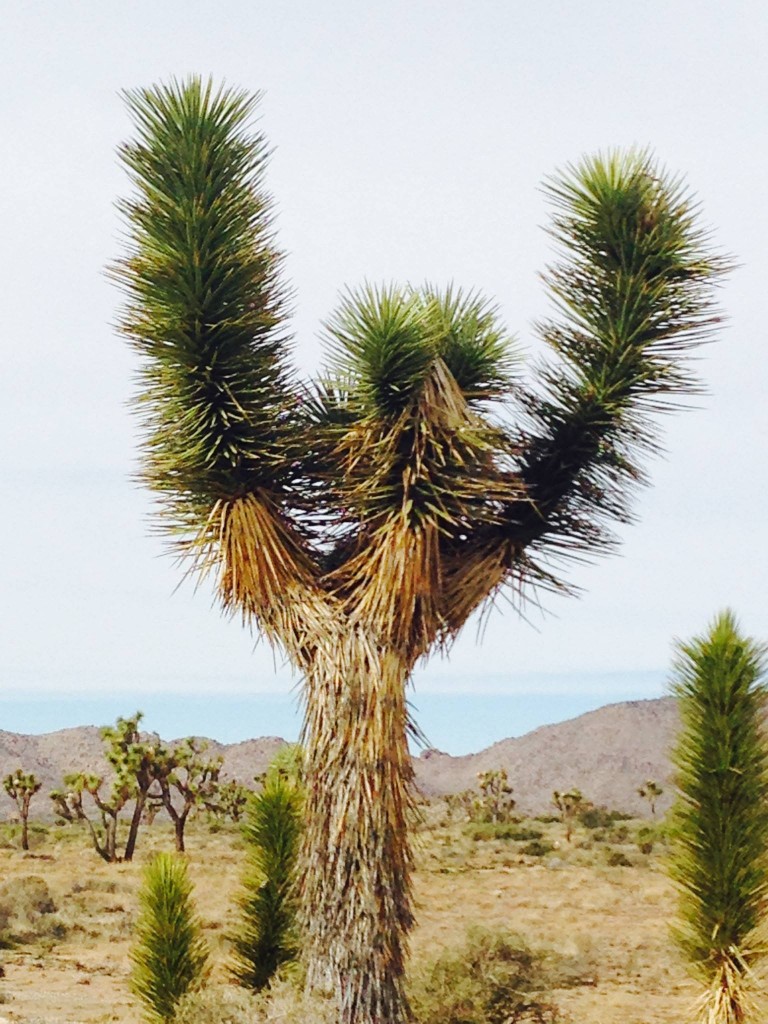 My visit to Cal State University at Los Angeles was well-received by students and Professor Pablo Baler and I deepened our friendship and love of Ramón Gómez de la Serna. Pablo was very generous in his description of my appearance in his class: “I already knew of his intellectual and spiritual generosity but what he did in my 4 hour grad seminar I have not seen before in my life either as a student or a professor: his passion for poetry, his knowledge, his energy, and his capacity to inspire students are a miracle of modern humanities.”

We reconnected with relatives, helped Ella as she started to suffer from her first real health issue, an infection that seems to be clearing up and headed north for the trip home. It was Sunday, December 8 that we listened to the Seahawks playing the 49ers down the road as we visited poets we are thrilled to call friends. The first stop was in the Oakland Hills with Michael and Amy McClure. Amy took Mer and Ella on a tour of her studio where she creates remarkable sculptures of horse heads and other pieces:

And Michael had me read him some of his new work (which I did not get a copy of) as well as my own piece from the recent residency at the Morris Graves Foundation, one of them anyway, #98 Why Redwings Sing:

Michael’s new work is replete with references to old age. There is a sweet melancholy in the work, as there has been for many years now. I’ll get to see these new poems in print when he is ready to unveil them, but during our road trip we did hear his voice come up on our I-pod. It was probably from a reading in Vancouver BC that I recorded when his Of Indigo & Saffron: New and Selected Poems was published. The poem that came up was from Swirls in Asphalt, #63:

NO REASON TO HOLD BACK THE PARTY
everything is eaten alive
and loves it.
The received perception
OF AWARENESS
is as good as a backrub and the green eyes
of a living cat with white whiskers.
This is a fire but we do not sit and sing
at its edge or speak of old
hunting trips.
There is no dance in the April rain
on platinum cinders.
Desperate and kind we own it all
in this cold lovely drip of water.
The melting together of our knowing
is the jewel
– a blend of emerald and ruby –
scattering light from meat.
The tiles on the bathroom floor
are highly glazed
chilling
MY
BARE
SOLES
and everywhere
are signs
of you – your voice,
your perfume,
a blonde hair on the counter.
I know we have inner lives
because I am deeply moved
by patterns of sunlight and shade
on the withered skin of my legs
and remember
a sac of spider eggs, dusty,
covered with leaf fragments,
on the side
of a steep stone cliff
above the boulders where we walk.
Beside the creek is a deer skeleton.

I was stunned by his perception in 1995 when first reading the poem Dolphin Skull from the book Three Poems, about which I interviewed him that year when I met him for the first time. His new poems have that blend of perception, stunning imagery and surprise, such as when the sac of spider eggs shows up in the poem reproduced above. 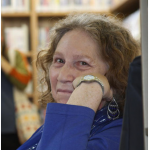 And though I did not get to see Diane diPrima during this visit, I was able to steal a glance at a recent chapbook of hers, lovingly dedicated to Michael and Amy and quickly transcribed this poem into my pocket journal:

POEMS ARE ANGELS
Come to bring you
the letter you wdn’t
sign for
earlier   when it was
delivered
by yr life.

The line breaks are not reproduced properly due to the limits of WordPress, but you get the idea here. What I get from the poem, one take anyway, is that when you write as an act of discovery, letting the language have its say beyond your own ability to fully understand, there are messages for you from the universe. I love her pre-texting era contractions, taken from Olson, who got them from Pound, who got them from the journals of John Adams, according to another gracefully aging poet/friend Sam Hamill. 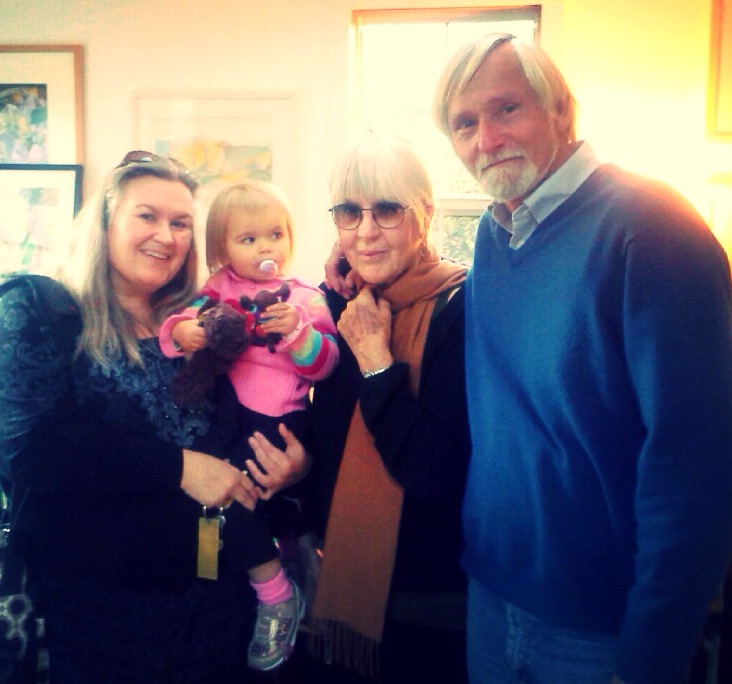 And finally Joanne Kyger. Mer, Ella and I had a short visit on the afternoon of the 8th and her husband Donald Guravich was there, along with family friend Gordon Baldwin, who Joanne told me “did the illustrations for TRIP OUT AND FALL BACK when he was doing his fine drawings and    wrote “some fine books since then on the history of photography.”

Joanne will be 80 in 2014 and has a new chapbook that she signed for Mer and I. Simply titled “2012” it is a lovely little book published by Blue Press of Santa Cruz, California. Described by the folks there as “one of California’s greatest poets” with “resilient consciousness,” Joanne was gracious (as always) and fascinated by Ella’s gym shoes which light up when she walks. “I want a pair of those!” she said.

She showed us a copy of another beautiful chapbook from the CUNY Lost & Found: The Poetics Document Initiative series: Joanne Kyger: Letters To & From” edited by Ammiel Alcalay & Joanne. At that link find a link to a copy of a broadside which has a reference to the topic here. I’ve taken the liberty to copy it: 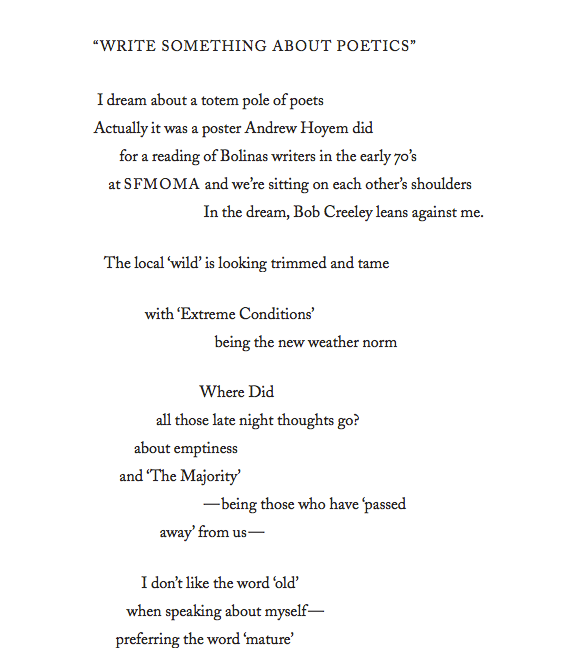 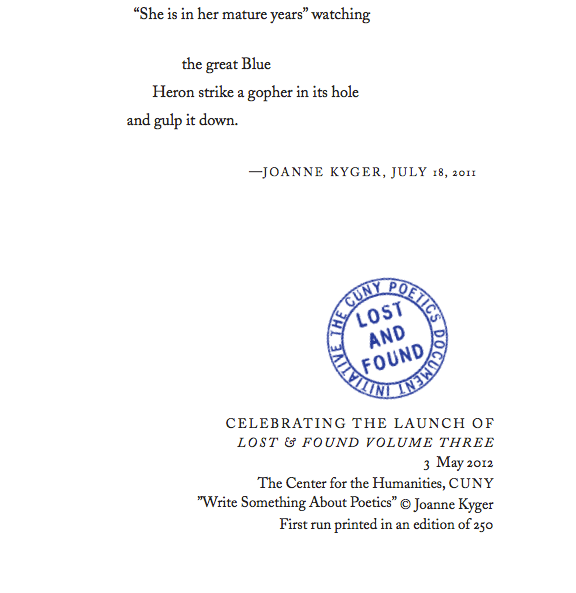 And I’ll close with the opening poem from 2012, which touches on many themes that I see regularly in poets of this Black Mountain/Open 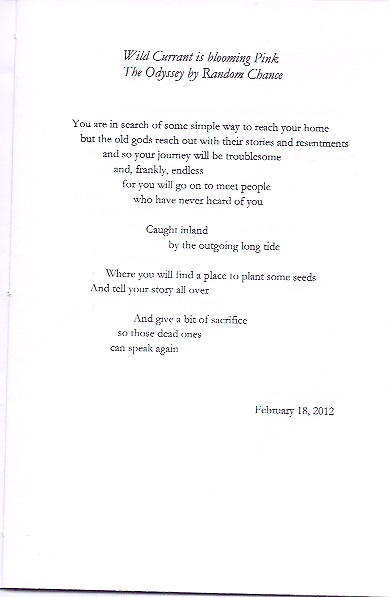 Form/Organic/Projective/Practice of Outside tradition. They cooperate with language instead of using it. The poem is an act of discovery and the poet is “not in control of [their] material” to quote George Bowering quoting a poor reviewer. Liberal use of quoted material is another trope which I love and employ myself, something Robin Blaser said was evidence of this stance toward poem making. What is outside the poet who practices the Practice of Outside? Good question. Maybe Joanne and Diane have a notion. That they have been around a while and practicing seriously for decades makes me want to pay more attention to their poems than the average poem that comes across my screen or my desk. That they are aging with grace is for me a HUGE reason to pay more attention. The greatest creation of a person is their life and the poem will always be a reflection of the care they give that most important task, as it is a reflection of the greater story they embody. Moments with poets like this are rare and must be savored. That Ella was there to meet artists like the ones mentioned in this post is one of the good things as a Dad I can give her. 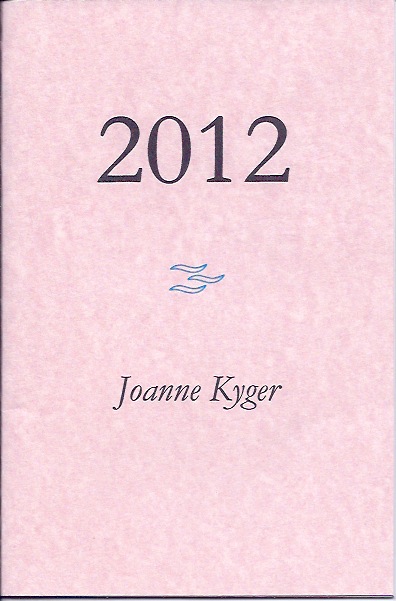