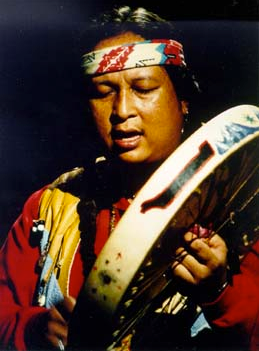 The man known by many as Beaver Chief came from a long line of Indian Doctors. In this interview I did with Beaver Chief, recorded in August 1998, he discussed his incarceration, his belief that the Northwest is known by Indian leaders all over the continent as the last stronghold for Spiritual medicine and other topics from an authentic Northwest Native perspective.

The program was aired in his honor again in 2001, shortly after his death, Friday, June 8, 2001, from an aortic aneurism. (Intro and original sponsor messages, 4:32). We have broken the interview down into several smaller segments for ease of listening.

In part one he sang the Full Moon Song, discussed how he believed his life was a prayer, how the Native people of this region never trusted the government, and how having a son changed his anti-social ways. Part 1 9:32.

In part two he discussed how his people have a tradition of changing names at key moments in one’s life, how he did that, how his power to work in a spiritual way comes, in part, from his experience with a more “dark” way of life, how he’s gotten marriage proposals from man and women and how the Boldt decision and the arrest and incarceration of AIM activist Leonard Peltier were symptoms of the continued prejudice against Native American people like him. It is in this segment he makes the claim that Seattle is known as the last stronghold for spiritual medicine. Part 2 11:11.

In part three there was one clarification and an address for his legal defense fund was announced. Part 3 2:49

In the fourth segment he sang a short version of the Cedar Tree Song, discussed how Cedar Trees are people (like rocks), about his re-connecting with his cousin, the legendary story teller Johnny Moses and some of the teachings he received while working with Johnny Moses, the importance of the four directions, how to build (and wear) sacred altars and how he was the “whip man” for Johnny’s medicine circles and Sisiwis, or The Sacred Breath, Sacred Ocean and Sacred Life teachings from the first world including God as Universe. Part 4  12:32

In the 5th and final segment he discussed how Seattle will be a growth area and the need to take care of the environment here. He discussed how ancient Hopi teachings helped Northwest Native people bring out their own traditional teachings, how those teachings and Native prayers have held off an eruption of Tahoma (Mt. Rainier) and how young people should do what they can to stay out of jail. Part 5 9:40.

Interview one with Beaver Chief is found here.