I was delighted to learn that in addition to a Subud couple from Portland, my friend Stephen Collis also traveled to New York to participate in the huge Climate March on September 21, 2014. His report on it reminded me of my experience at the WTO protest in 1999 to which I brought my daughter Rebecca and we got out of there before the tear-gassing started.

One key paragraph in his report was on the role of poetry in leading humans (& all living things) out of what he calls the Anthropocene, or:

that era in which all of life, including the geophysical and stratospheric aspects of the planet, has come to be exploited for human profit. 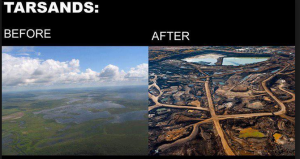 He cites the Tar Sands in Alberta where every living thing has been killed or removed from the area in an attempt to get what last fossil fuels can be extracted in the rush to Peak Oil. But the key paragraph was:

Poetry, I want to suggest, is a special use of human language by which we can activate this wider semiotic process and engage with signs that are alive. Poetry sounds things and patterns that extend beyond mere human speech, into the wider surround of the living. I say this because I think poetry is that process of careful listening—to what Blaser and Spicer called “the outside”—as well as an exercise of the ability to respond to that outside (to borrow from Robert Duncan, and complete the San Francisco Renaissance trifecta).

He adds that using our bodies in such actions to be together with other marchers in the street is also poetry. And like the notion that this literary era we exist in (after Modernism and Post-Modernism) has yet to be named, the anthropocene is good enough for me, for now, to describe the general era in which we live. It communicates the vast arrogance of “humans” who would continue obliterating huge swaths of the planet for profit, who’d deny the toll of the Western fossil-fuel addicted lifestyle on the biosphere and whose culture is an anti-culture, defined by the needs of corporations. Surely they are sub-human.

But I’d add Charles Olson again to the mix of critical influences of our poetry here in Cascadia. (Yes, Spicer and Duncan who Collis mentions, were south of Cascadia proper, but had a huge influence on Vancouver, BC poets. This is why Joanne Kyger was invited to the 2nd Cascadia Poetry Festival last May, because of her poetics and experience developing that along with Duncan and Spicer. George Stanley as well. See this video of their CPF2 panel participation and this one of their reading.) Olson’s lone visit to Cascadia, as far as I know, was his visit to the 1963 Vancouver Poetry Conference, the most influential poetry event in the history of the bioregion, for my money. Vancouver resident Ralph Maud ran the Charles Olson Society for years and is one of the world’s leading Olson scholars, so he would know definitively. And I bring Olson up at this time to bring the body back in.

Eireene Nealand’s excellent recent essay reminds us of some sense of the power of Olson’s essay entitled Proprioception. Wikipedia says:

Olson urged this skill in creating poetry. That poets should get their bodies back in the game is critical, along with other humans who are already doing it through the explosion of yoga and pilates studios and many other forms of mind-body mindfulness. For many years I’ve been attracted to those modalities that can help us translate things that are happening in the body (often pain) with those things happening in our thought patterns so we can change course. Traditional Chinese Medicine posits that each meridian (energy pathway through the body) is associated with an organ and each organ with a chief emotion. For example anger = liver; kidneys = fear. Tell that to Satchel Paige who said: “avoid fried meats which angry up the blood.”

Or Soma Neuromuscular Integration which suggests the problems with the feet usually mean fear of moving ahead in life, the pelvis is about security and the knees which act as the fulcrum between those two things. Or Louise Hay, which has a whole book (& app!) about the mind-body connection that, with its affirmations comes across as very New Agey, but has been eerily accurate when I have checked it out against what’s happening with my own body and the health situations of others I’ve had dealings with. Very controversial to think there is a connection between our thought patterns and our maladies and we court the “blame the victim” charge here, but that’s not my intent. I use it in my life to discover the mythic at work and to be truly free. To take responsibility for everything that happens, especially where my health is concerned.

Add Ontological Kinesiology to the mix (which I wrote about recently) and the Subud Latihan Kejiwaan and one has a whole plethora of tools in which to understand how our late anthropocene bodies can navigate the shift to what lies beyond it. To an era in which we can physically experience the interdependence which we, as good consumers, have forgotten. Our bodies are the tuning fork and the signals of how to proceed are coming in vast waves. Tune back in to our bodies so that we may re-inhabit them and their rightful place in the world as part of creation, not as destroyers of it. So that we can restore and maintain natural systems like watersheds and not turn them into hell as they are near Fort McMurray, Alberta, and in the fracking zones around North America and the world, meet basic human needs sustainably and rely on local materials and resources as much as possible and as sustainably as possible. Millions of people already get this. Indigenous people practicing in traditional ways never forgot.

That my body would lead me to the above practices and to bioregionalism says a lot about what I have tuned into. That anyone reading this can take faith in an alternative to the drugs, surgery and radiation offered by allopathic medicine is part of why I write and that by engaging in these practices and modalities above helps me construct my own map of what my body is trying to tell me is one of the most exciting research projects I’ve ever attempted. Now is the time for us all to see what our bodies are trying to tell us, along with half of creation, if we can remember.