I should not have been so naïve to think a post that referenced religion would have gone by without someone reacting as if I’d just stabbed a pig. But add Facebook and the culture of narcissism and you get camps and an internet sh*tstorm. What I get though, is clarity in my own thinking and a deeper understanding of the cultural mores of Cascadia, especially as it regards matters of spirituality. The offending post: 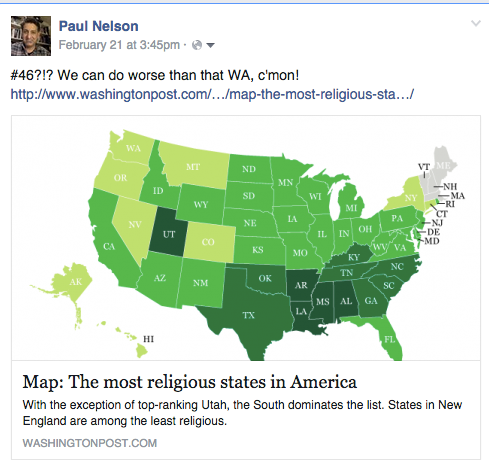 Those sympathetic to the post, who either do not identify with a religion, or don’t OVER-identify with one, were quick to add their takes, rooting on Maine (#48) or expressing pride in this achievement, but when one commenter pointed out the relation between those religious states and rates of obesity and lower I.Q.’s, that they appeared to be connected, the holy water hit the fan. The thread was described as “bigoted, small minded elitism masquerading as liberal thought” and “irresponsible.” There was no attempt to address the correlation drawn by the previous poster, just the insults. And there is something about the thread being on MY wall that made me feel like a certain amount of decorum was required. I see it as if someone came into a conversation in which I was involved, not knowing who I was talking to (not being a friend or even an acquaintance with those around me) and just popping off. And then his friend arrived, with more courtesy, but still likening certain comments about religion in out thread to someone expressing homophobia. Problem is you can quit a religion, but you can’t quit being gay. Gay people do not try to “convert” Episcopalians to homosexuality (not without liquor anyway) or tell them they are dirty sinners who are doomed to hell if they are religious, so the analogy does not work. A suggestion that they take a page out of Buddhism and experience the joy of non-attachment was not well-received either.

Part of one of my posts was:

…We are not religious in this state and less so in Seattle. We take it as a matter of pride, for many reasons. Two are represented here on this thread. Religion has been justified to enslave Africans (as President Obama astutely pointed out), to lynch people and to terrorize Queer people. So you can see how some folks in my circles would be happy that we’re less religious here, would be drawn to a place where they would not have to deal with as many “religious types.” Those who talk about Jesus, but do not emulate him. But that does not mean we’re less spiritual here. The war in Iraq/Afghanistan and elsewhere, the so-called “war on terror” was launched by George W. Bush and his Christian advisors and called “a crusade.” Essentially a Holy War. With spiritual warfare, the battle is with one’s lower impulses, not with an artificially created “other” and not by bombing wedding parties, torturing and any number of atrocities this country and other so-called Christian countries have engaged in, usually against people of color. Count Israel’s war against Palestine as an example of a war fueled by religious differences as well as fanatical Muslim jihads. No one is asking you or anyone else to give up their faith. We do not want it thrown in our faces, and if used to justify hateful acts (as it has for centuries) we’ll call bullshit on “religious types” again and again. Carl Sandburg’s poem “To a Contemporary Bunkshooter” calls bullshit on the “fake Christians of his day, a century ago. _________ was pointing out the FACT that states with higher rates of religion also have higher rates of obesity and lower average I.Q.’s That she makes these links may seem unfair to you, but they are well-known facts and her supposition is that there is a link. You can disagree, but it’s her view and I see no need to delete her comment, nor am I offended by it, but I do not identify with a religion. If you can’t separate these kinds of criticisms from your own feeling of religion, she must be hitting a nerve and maybe you ought to consider a Buddhist notion and that being one of attachment and the extra suffering it causes. Just because she makes the link does not mean you have to accept it. I am drawn to a place that values spirituality over a high percentage of people who identify with a religion and a bumper sticker I saw out here many years ago said: “JESUS! (protect me from your followers.)”

And it just so happens that a post about my late friend Beaver Chief hits the top ten on this blog again. In segment two of the interview featured here he states that it is well-known throughout the continent and the world that Seattle and Cascadia as the last bastion of “spiritual medicine.” https://paulenelson.com/2014/03/19/seattle-cascadia-last-stronghold-for-spiritual-medicine/ It is late in the segment that he says this, but the whole interview was quite interesting to me and is likely a huge source for how I look at spiritual matters. These notions have a way of getting into my poems like 72. Moss Spruce Cedar Cathedral.

And so it goes. I’ll be sure to try to make peace with those I seem to have offended, take to heart their criticisms and, in the future, remember about the topics that are sure to touch a nerve. Now on to Sandburg. Forgive the poor linebreaks. 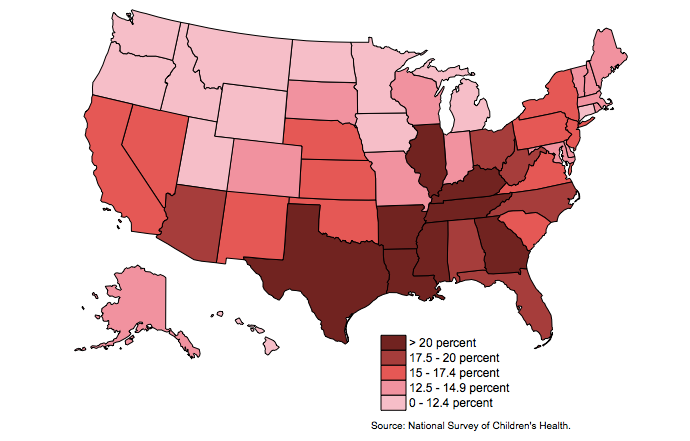