I’ve re-watched the video of the panel on which Robert Bringhurst participated at the recent Cascadia Poetry Festival. This was the third iteration of the fest and was staged in Nanaimo, BC, April 30-May 3, 2015. The panel featured one of the most vivid moments at the fest when Bringhurst spoke in the Haida language, one of the indigenous languages of the bioregion. There was the kind of silence in the room, a deep, attentive silence, that accompanies content of stunning import, and that is what I go to such events to experience ore than just about anything else. This was profound and all three panelists have done their homework. Some points Bringhurst made: 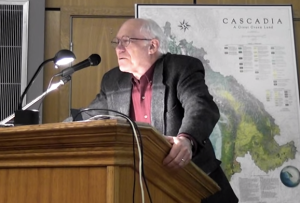 1) Maps are never finished. There are at least 82 indigenous languages in Cascadia and those could be added as a layer to David McCloskey’s award-winning map of the bioregion. They belong on the map because “languages are life-forms too, just like the forests and the grasslands. They are living things. They are mortal. They die. They don’t last forever. They grow up, they change, they live, under good conditions, very long lives, thousands of years, but they don’t last forever. They are not static. So even the language map would change.” He inferred that English was like an invasive weed that takes over and destroys the indigenous languages. Only 50 of those languages are still spoken.

2) The indigenous languages belong here because “they learned how to live here. Every language has a literature. Most literatures never get written down, they’re oral, and that’s the way they live. The literature can be killed before the language is.” This is important, he says, because “literatures know things… They are the part of heredity that is not genetic.” He says all of the indigenous literatures were about that places where they lived and the main characters in the stories are the spirits of the land; air, sea, river. Stories about how the earth lives its life and how people can live life with it. The main characters were not human beings. He said that there were 300 indigenous languages in North America and more than half of those were spoken west of the Continental Divide, on much less than half of the continent. This is essentially the reverse of settler culture in North America where the bulk of the population is east of the Continental Divide. So the West, he argues, is where the population, language and cultural density was. He says the West was the Cultural Heartland of the continent. More than half of the indigenous languages of the west were spoken at tidewater. “Right on the coast.” Every language has a literature and literature is the brain of the language. “every student in Cascadia should learn about the geography and the human history, but also the linguistic geography of this place.”