Practicing Breath and Outside

Watching the posts and the likes and the ads float by on Facebook is fascinating to me and I check in a few times a day. I can do a Google search for something like DIVORCE or CALIFORNIA TRAFFIC TICKET and see ads related to those “interests.” I hate to tell you but I’ve already dealt with these so you can turn the ads off I want to say but save my energy for a giant guffaw at a suggestion:

And then there is the latest poetry dustup, this time between Kenny G and Cathy Park Hong. Kenny G is a “Conceptual” poet who once had an intern type a Sunday edition of the New York Times and called it a poem. He recently got a sympathetic piece in the New Yorker magazine which one can disregard once you see Conceptual Poetry referred to as: “a revolutionary poetry movement.” (I see in instances like this the grief Sam Hamill deals with as he travels to places like Venezuela or Argentina and has to explain to poets there how empty soul-less much of this country is, EVEN the poets.)

And Cathy Park Hong, Poetry Editor of the New Republic rightly points out the fluff piece author’s bias, the reinforcement of patriarchal values he practices and where people can go to get a sense of what is really happening on the poetry frontier. This interests me, as I am with William Carlos Williams, who said: “No poetry of distinction without formal invention.” I have dedicated a couple of decades now to the various spontaneous writing experiments.

But at one Facebook posting of Hong’s article I had to rant:

Stop making unconscious people famous! Direct your energy to more important people/places than Kenny G/ConPo. Conceptual poetry is not dead, it was never alive no matter how many New Yorker pieces it attracted. New Yorker = Who Cares?‪#‎LightaCandleDontCursetheDarkness‬

So (as evidenced by my post late last night about Nate Mackey’s talk at the University of Washington: On Breath and Precarity) I was psyched that Mackey gave a lecture that weaved in such disparate elements such as Charles Olson’s Projective Verse, Denise Levertov’s poem:

And I walked naked
from the beginning

breathing in
my life,
breathing out
poems,

Mackey stopped before that last line, but I love that and love the poem.

Mackey added Sun Ra and Amiri Baraka and Sonny Rollins as he mentioned how in the 50s and 60s in USAmerican poetry: “Breath was in the air.” Breath is certainly in Jazz and he illustrated that by pointing out “Horns are pneumatic lungs” and played Ben Webster’s breathy version of Tenderly to illustrate the point. He would wave all this into a societal reality check that we face here in 2015, that being the systemic/institutional racism that is most profoundly illustrated by the deaths of Black men and women at the hands of police. Tying in his topic the painfully poignant quote by Eric Garner, who was choked to death by police: “I can’t breathe.” In the poem that followed, the line:

Why’d they send us off the planet so soon?

Mackey illustrates the validity of Projective Verse in our time and some of the depths to which one can take it. When a poet’s work is connected to the “outside” (and I love that Mackey likes outside in poetry as he likes outside Jazz) when that poet connects to something bigger than themselves, the universe is guide. One has thousands of potential “ghost escorts” to use another phrase Mackey used last night. But the USAmerican poetry establishment, the Avant Garde, gave up the Projective for LANGUAGE poetry and then Conceptual Poetry and soon, if we are not lucky, something else. Hong and others who react to Kenny G and his ilk only feed the beast, the ego that drives work like this, work that Olson said in Projective Verse leads only to “sprawl” a prophetic use of THAT word in 1950 just as US post-war suburbs were being thrown up like so many bad frozen dinner meals. When one is connected to what’s outside, they can sing something bigger than themselves and it is unlikely they’d make the kinds of mistakes, the kinds of horrific errors in judgment, being made by people who identify as “Conceptual Poets.” Let the careers of these folks fade. Don’t give them energy.

Two other stories, one I saw someone post on Facebook and one I posted myself, gets us to what is real and now. One: an upcoming exhibit by Women Abstract Expressionist painters and Two: The Women Who Helped Sustain Net Neutrality: 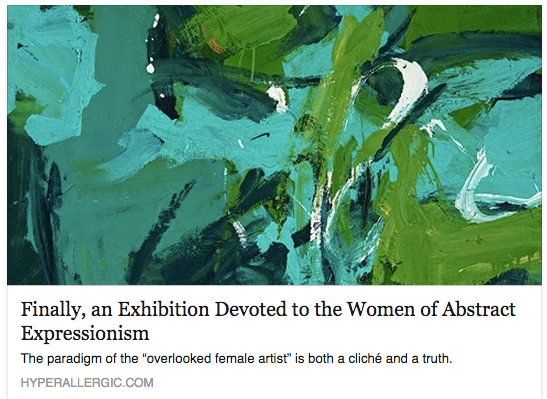 Let us honor Perle Fine and Elaine de Kooning, Grace Hartigan and Deborah Remington, Sonia Getchoff, Judith Godwin, Joan Mitchell and Lee Krasner if we haven’t already. Click on that painting and go to Denver to see the exhibit. Tell DAM that you want to see more of this. Tell the City of Denver you came to their town not to see the Broncos or Rockies, but to see Grace Hartigan’s paintings. This is how we move from the dark ages of patriarchy and empty gestures like ConPo to something of USE. 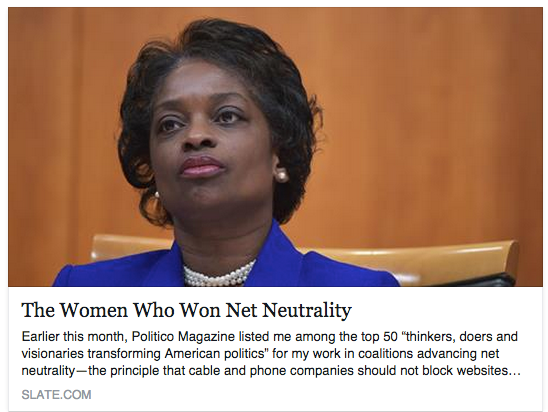 Thank you Barbara van Schewick, Susan Crawford, Jessica Gonzalez, Jessica Rosenworcel, Mignon Clyburn and others who helped Net Neutrality be the law of the land. If they got this one, who knows how many important issues in the future they’ll get and organize to fix.