I guess pizza and coffee with a cheese Danish is out.

In one way this post is a continuation of the Bernie Sanders expands the Cultural Bandwidth post of a few days ago. And today two noteworthy things happened. One of the bloggers I linked to in that post, Benjamin Studebaker, wrote an incredibly astute piece on the current USAmerican election campaign. He correctly characterizes the impulse behind US voters of all persuasions and puts it into historical perspective again. It’s hard to pick out a key paragraph, but here’s a good one:

Neoliberalism’s time may already be up in 2016. It’s finished in the Republican Party, and Hillary Clinton is all that stands between the left egalitarians and control over the Democratic Party. The imminent collapse of the dominant economic ideology is not yet widely recognized. Right now, the affluent people who have benefited from neoliberalism are completely confused. They don’t understand why so many people, particularly young people, are flocking to candidates they consider totally insane. You can see this all around you on the internet and in the media–there are columnists, pundits, and TV personalities constantly acting incredulous that the public is not jumping up and down to vote for Clinton, Kasich, Bush, or Rubio. Michael Bloomberg is so confused and disturbed by the possibility that the public is about to pick someone who isn’t a neoliberal that he’s considering an independent run. Like most affluent people, he thinks the only reason the neoliberals are failing is that they are running ineffective campaigns.  Bloomberg and the American neoliberal political establishment live in a bubble–they are insulated from the real-world consequences of stagnant median incomes. They don’t understand the extent to which the public, especially young people, have totally lost confidence in them to run this system effectively and fairly.

And here is a handy graphic from his post: 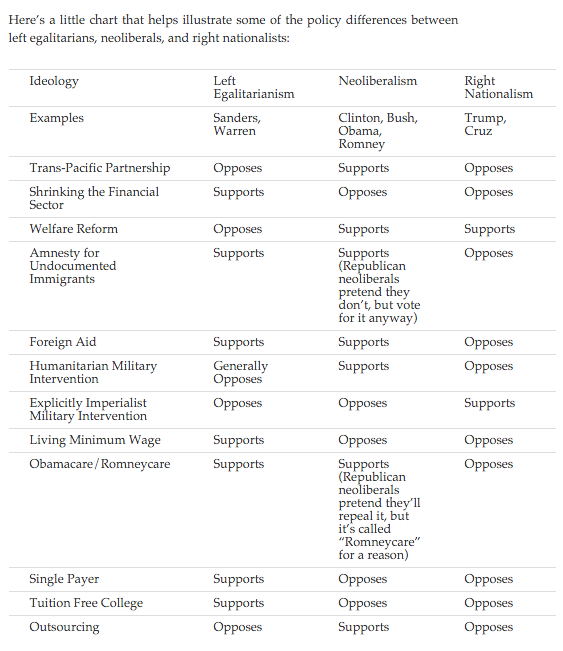 And when neoliberalism is rejected, as Right Nationalism’s best demographic days are in the past, the cultural bandwidth of the possible in political, economic, social and artistic will expand. In some ways, it already has.

But as I was having a nutrition counseling session with Kathryn Heath, I realized that I live in that Left Egalitarian expanded bandwidth life already. I reject health insurance because it is the realm of allopathic medicine and the pharmaceutical industry. I am waiting for single payer, or Medicare, whichever comes first and I am 54. Taking a pill to get rid of a symptom, with only one exception in my case, blows an opportunity to discover a bit of my own personal mythology. 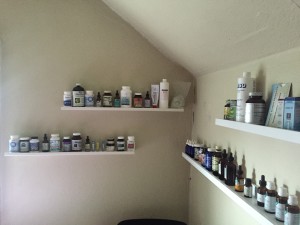 I went in to see her for relief from my migraine headaches, the rash that’s plagued my fingers for a while and for weight loss. The usual suspects were trotted out by well-meaning friends: sugar, gluten, &c. But today I had an opportunity to get expert assistance in discovering what are the real no-nos for me if I want to alleviate the rash and headaches and lose weight. Gluten, caffeine and dairy are the keys for me. Does this mean a lifetime ban? No. But a good five weeks is prescribed. And because my system is clear of all pharmaceuticals, that I’ve been sober for all of 2016 and that something deep inside me yearns for relief, this experience has manifested in a very easy and timely way. (I have one person in particular to thank.)

And Kathryn Heath’s manner is remarkable. The lightest kinesiology touch I have ever experienced, a deep empathy and clear integrity are all things I noted during our 90 minute session in her Portland home office today. Here’s a little bit of how she operates:

So, if your impulse is to ridicule me for my political stand, or my approach to wellness, in a life that has connected me with so many fascinating alternative healers like Katie Heath, first – check your privilege – and save yourself some time, because I don’t live in your limited bandwidth universe. I live in the one your descendants will live in. One that is available to anyone who cares about what is real and sends back the hype of the neoliberal/allopathic/dominator model. One that is recognized in the political breakdown by Studebaker above.