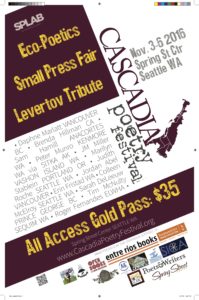 There are about a thousand things I could write about the recently concluded Cascadia Poetry Festival. That John Olson could step in with only a few hours notice to read on the Main Stage was a blessing. That the organizers succeeded in creating a sense of community was another. That there was so much help to create that community, Joe Chiveney and Cathy Visser cooking meals for the Main Stage poets and volunteers. Bhakti Watts helping in the kitchen, with clean-up and hosting the Book Arts workshop. Leslie Kinkaid, Julia Hurd and volunteers from Cascadia Now working the registration table. Matt Trease and Greg Bem organizing the After Party and so on and so on. 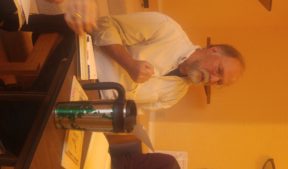 The Poetic habitat now workshop facilitated by Daphne Marlatt was a validation for me and my own sense of the depth of Denise Levertov’s poetics was enhanced by the three hours we spent together talking, listening to poems being read and hearing the work of participants.

The Living Room was a great feature, as usual and I attended every minute of the democratic portion of the fest. The After Party at Common Area Maintenance again delivered a demographic about 25 years younger than most of the gatherings at the Spring Street Center. The Small Press Fair had a good sampling of Small Presses and I dropped about $50 bucks there. 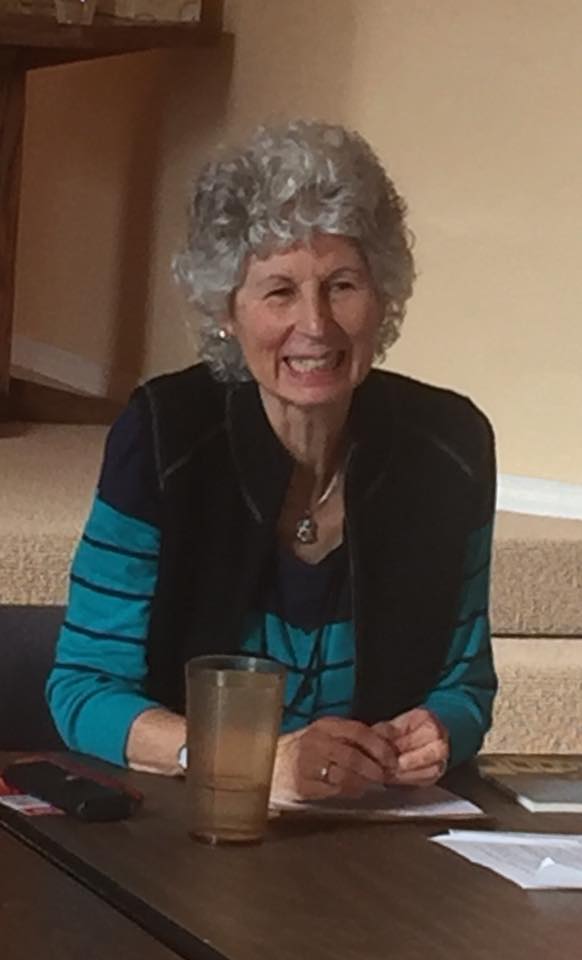 I think the panel discussions, led in an expert manner by Pater Munro (the Water Panel), which featured a truly mythic presentation by Roger Fernandes, were extraordinary. The Levertov Panel was also quite expert, with Tim McNulty, Daphne Marlatt and Brenda Hillman all sharing angles on Levertov’s work and consciousness that deepened my appreciation of her work. It will have been twenty years next year since Levertov died and her work is as relevant as ever. It was good to have that notion reinforced.

The Sunday ritual walk to Levertov’s grave was also quite magical, with Daphne Marlatt later saying:

i was so glad to participate in the walk to Levertov’s grave too, those moments of silence amongst us all were an important acknowledgement of her impact.  so many writers there i was delighted to meet & get to know a bit.

While I am loathe to toot my own horn, I am going to share something written by my friend Jared Leising, who was a skillful emcee for the closing reading at Open Books. He said:

Thank you, Paul. And thank you all for being here, in one of the most amazing stores in the world, and at the closing reading for the fourth Cascadia Poetry Festival. Before I introduce our readers, I want say a few words about this festival and what it’s meant to me.  I’ve attended the last three festivals, and this year, like the two years before it, in Nanaimo and in Seattle, when Seattle U was our host, it’s been dynamic—for me and my students, who I’ve brought to all three festivals.  When I say dynamic, I mean the festival feels like a good poem.  It has layers to it and makes these leaps that few conferences and festivals do.  To me, that’s what matters, keeps me coming back, and it’s in part thanks to all of you, but largely because of Paul Nelson.  Someone who doesn’t get enough credit for the work he’s done, the people he’s influenced, and the perspective he’s offering all of us with this amazing festival.  So, thank you, Paul.

I am humbled by this and want to say that without the people mentioned above, it does not happen. Thank you Jared and to all who participated in the fest and supported it financially. This festival is not for everyone, but it DOES tend to attract those who are interested in something besides what these fest often turn into, revolving around ego and positioning. Those poets interested in that will continue to find better things to do during our fest and that works out well for us. For those interested in a real sense of poetic community, we invite you to CPF5 in Tacoma, October 12-15, 2017, as we stage a tribute to Richard Brautigan. Viva Cascadia! Viva Poetry! 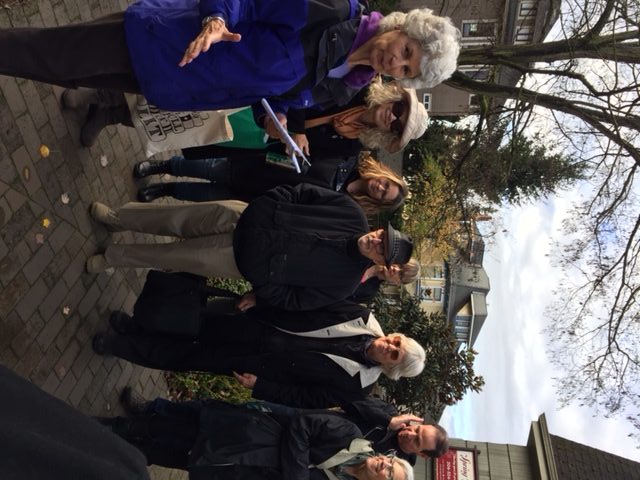 Starting the walk to Levertov’s grave (Photo by Matt Trease) 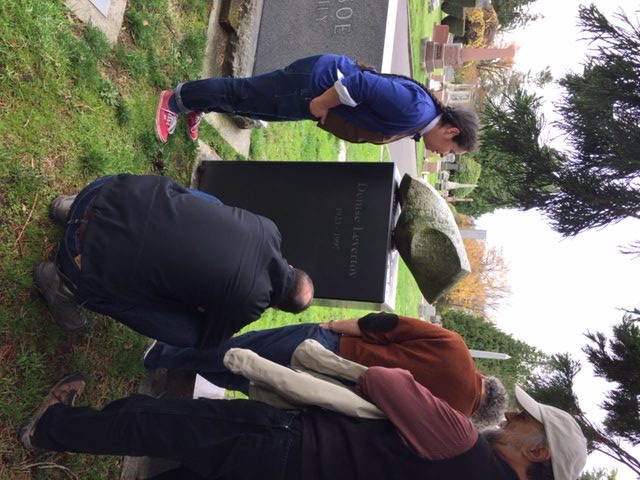