I’m delighted to be doing another Zoom-Because-of-Shelter-in-Place reading, this time for  Margin Shift, Thursday June 18 at 7pm. As its name implies, Margin Shift is the most diverse reading series in Seattle, but also the one that features the most challenging work as well and in that way owes a debt to the old Subtext Reading Series which had a wonderful 15 year run. Along with Red Sky Poetry Theater and the Bumbershoot Literary Series with the late Judith Roche curating for 20 years, Subtext was a jewel in the Seattle literary scene of the late 20th and early 21st century. Margin Shift is in this lineage. Below is the call on Facebook, with all the information you need to tune in via computer Thursday night. While I do not know all the readers, I am a big fan of Carletta Carrington Wilson and Lorna Dee Cervantes and honored to read with them. Thank you Deborah Woodard and Matt Trease for inviting me and for all your efforts to make this series what it is.

Events like this, best witnessed live, remind me of the old days when we had to sit in front of the TV or radio at a certain time. (Remember the King Biscuit Flower Hour?!?) It feels like an EVENT. This one promises to be an event and I hope to see you Thursday night. 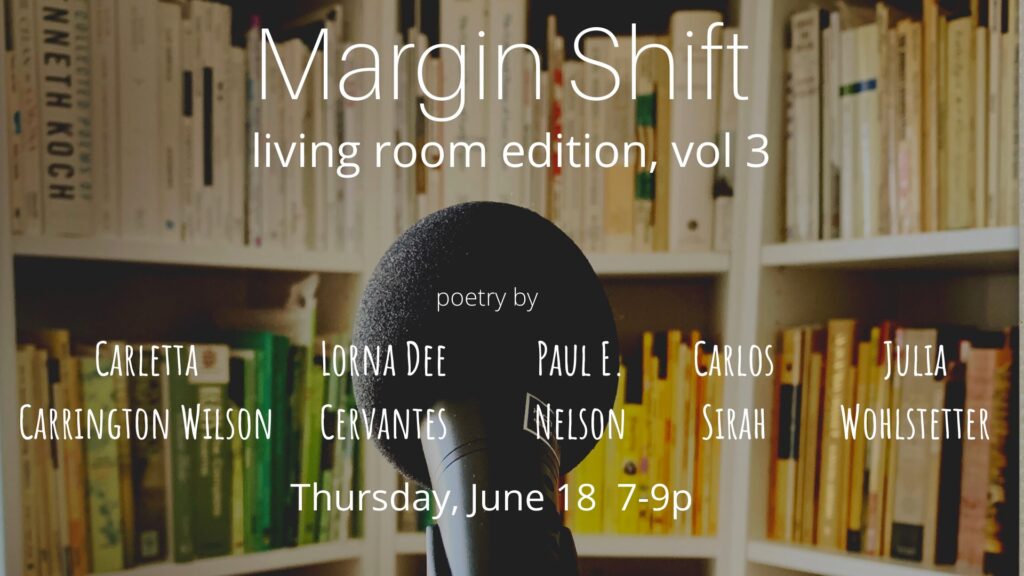 It seems as though a millennium has elapsed since last month. The world is bursting at the seams, and the old excuses for inequality and brutality are falling apart on an almost hourly basis at times.. MarginShift has and still stands with the struggle for black lives, which includes indigenous lives, locally and around the world, against the Evil Empire of slave patrols, military imperialism, fascism and global capital. We feel that poetry is central to that resistance, because it allows us to imagine a world with no police, no armies, no white supremacists. Thursday night, enjoy the work of five fantastic writers as they read from their own living spaces spread out around the ancestral homeland of the Duwamish, Muckleshoot, and other Coast Salish tribes here in Seattle, as well as the Multnomah, Kathlamet, Clackamas, Cowlitz bands of Chinook, Tualatin Kalapuya, Molalla and many other Tribes who made their homes along the Columbia River in the Portland Area, and the Lanape in the New York City Area.

We’ll begin at 7pm PDT on the dot. While you watch, be sure to like, comment, and donate to the tip jar via PayPal/Venmo. All donations will be split among our readers and with Common Area Maintenance to help ensure that spaces like CAM remain after the crisis is averted.

Also support L.E.M.S Bookstore/Estelita’s Library (a black owned bookstore and cultural center in Columbia City) at their website: https://sites.google.com/keytechlabs.org/lemsbookstore/home
Or when you buy books, order them here: https://bookshop.org/shop/estelitaslibrary
A portion of the sales go to L.E.M.S.

Let’s build this new world together!

Check out this month’s lineup:

Carletta Carrington Wilson is a literary and visual artist. She states, “I connect threads of thought to lines of descent by exploring a body as a body of text, a text infused with cotton’s print and imprint. Lines lock a life onto a page and breathe into it a body’s breadth. My poems are footprint and handprint, imprint and impression of lives that have been denied their story in the Great Age of Print and Sale.

Most, recently, published are works included in:

Also, dictionarium of a daughter and typeface of the erased in The African American Review: https://muse.jhu.edu/issue/40907

A fifth generation Californian of Mexican and Native American (Chumash) heritage, Lorna Dee Cervantes was born in San Francisco, and raised in San Jose. The recipient of numerous awards, she is the former Director of Creative Writing at the University of Colorado in Boulder. Her books include Emplumada (1981), which won an American Book Award; From the Cables of Genocide: Poems on Love and Hunger (Arte Público Press, 1991); Drive: The First Quartet (2006); Ciento: 100 100-word love poesm(2011); and Sueno: New Poems (2013). In 1976, she founded MANGO Publications, which was the first to publish many notable Chicano writers, including Sandra Cisneros, Jimmy Santiago Baca, and Alberto Rios. She is also co-editor of Red Dirt, a cross-cultural poetry journal, and her work has been included in many anthologies including Unsettling America: An Anthology of Contemporary Multicultural Poetry (eds. Maria Mazziotti Gillan and Jennifer Gillan, 1994), No More Masks! An Anthology of Twentieth-Century Women Poets (ed. Florence Howe, 1993), and After Aztlan: Latino Poets of the Nineties (ed. Ray González).

Founder of SPLAB and the Cascadia Poetry Festival, Paul E. Nelson was a professional broadcaster from 1980 to 2006, and researched, hosted and produced over 450 original public affairs radio programs and over 150 additional interviews since then. On-air host, news anchor, and public affairs coordinator in Chicago, Seattle, Baltimore and other towns, he’s a poet who has given presentations or readings in Brussels, London, China, and other places while being very active since 1994 in the Puget Sound literary community. Published books include: American Prophets (Interviews, Seattle Poetics LAB, 2018) American Sentences (Apprentice House, 2015), A Time Before Slaughter (Apprentice House, Nov. 2009, shortlisted for the Stranger Genius Award in 2010), Organic in Cascadia: A Sequence of Energies, published in English and Portuguese by Lumme Editions of Brazil in 2013 and Organic Poetry (VDM, Verlag, Germany, October 2008). His 2015 interview with José Kozer was published in 2016 as Tiovivo Tres Amigos. He is also co-editor of four anthologies: Make It True: Poetry From Cascadia, Samthology: A Tribute to Sam Hamill (Seattle Poetics LAB, 2019), Make it True meets Medusario (Pleasure Boat Studio, 2019) and 56 Days of August: Poetry Postcards. He writes an American Sentence every day and lives with his partner Bhakti Watts and youngest daughter Ella Roque in Seattle’s Rainier Beach neighborhood in the Cedar River watershed in the Cascadia bioregion.

Buy A Time Before Slaughter: Featuring Pig War and Other Songs of Cascadia at: https://aerbook.com/maker/productcard-5633192-4208.html

Carlos Sirah is a native of the Mississippi Delta. He is a writer, performer, and cultural worker, and U.S. military veteran, who opposes U.S. militarism, in all its permutations, both at home and abroad. Sirah creates formal structures rooted in Black expressions of possibility, taking the shape of concert, lyric prose, procession, as well as screen and stageplays. Sirah’s interdisciplinary practice thinks with multiple aesthetic traditions: Black Arts Movement, Theatrical Jazz, Free Jazz, Blues, and Black Spiritual practices. Sirah is a member of the Remember2019 collective and the emerging Veterans Art Movement. Sirah holds an MFA in Writing for Performance from Brown University. His debut work, The High Alive: An Epic Hoodoo Diptych is published by The 3rd Thing Press.

Buy a copy of The High Alive at: https://the3rdthing.press/product/the-light-body-the-utterances-a-tete-beche/

Julia Wohlstetter is a poet born in Seattle, WA. She is the creator and co-host of Poetry Practice Space at The Independent Publishing Resource Center in Portland, OR, and curates the reading series “5 by 5” at Cardinal Club. Author of the chapbooks “Please and Please” and “Forever Machine” (2017) her poetry has appeared in Reality Beach, Metatron-Omega, Bodega Magazine and 1001 journal. This fall, she will begin her MFA in poetry at The Iowa Writers Workshop.
Find her work on instagram: @j_pomes