Notes on Being Human Is an Occult Practice 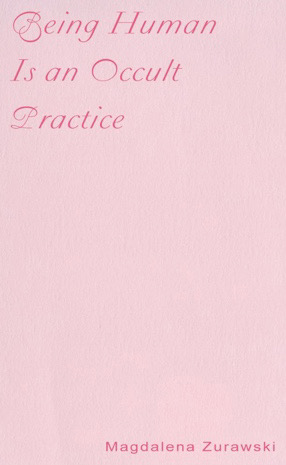 I was excited to see a chapbook with such a provocative title. Magdalena Zurawski is the author and is currently Associate Professor of English and Creative Writing at the University of Georgia, where she directs the Creative Writing Program. The new chapbook was published by Ugly Duckling Presse, the same press responsible for the chapbook about the first books by David Henderson and Mary Norbert Körte and their common link, Diane di Prima.  That was written by Iris Cushing and my interview with her about it came out a few weeks before Diane’s death.

In Being Human Is an Occult Practice, Zurawski — in the first paragraph advocates for a logic “foreign to the machinations of neoliberalism, an ideology that reduces all human relationships to market relationships.” For me the USAmerican presidential election of 2016 put this notion of neoliberalism into stark relief and at that time I realized I’ve long advocated for a logic opposed to neoliberalism in the work I have done with my syndicated radio interview programs, SPLAB, the Cascadia Poetry Festival, my interviews once syndication ended, in workshops and with many other activities.

Earlier in that first paragraph, Zurawski argues for “literary studies in general and poetry in particular on the grounds of their potential as sites for an experience of generative and necessary unproductivity…” Of course she is using this language in our contemporary setting of hyper-neoliberalism, and I get her point, but as a person who was slow to recognize what many now see as THAT stance toward reality (neoliberlism) I realized (once I understood its definition) that I was against it and more importantly have long advocated for a whole-systems approach to issues. That aforementioned syndicated radio program specialized in whole-systems philosophy (and practice) and gave me a huge training in it and provided manifold leads to continue that line of thinking.

This also led to a stance toward poem making that understood poetry’s historic value as a soul-making opportunity and, more importantly for a poetics that, in Michael McClure’s words was “alive and conscious.” The recent Poetics as Cosmology course sought to impart this approach to participants and it appears to have been quite successful. See: THIS and THIS.

Zurawski recognizes this value of a life in literature as well and articulates it later in the essay in this way: “In the literature classroom, a subversive path to knowing ourselves outside of the economic structures that order social life has always existed in occulted form.” She has a critique of Kant’s concept of freedom using an example from Zora Neale Hurston which is effective, democratic and beautiful. Zurawski also displays a range of references from Kant to Hurston from Wordsworth to Gertrude Stein to Robert Duncan. Duncan’s now famous (in certain circles) introduction to the work of H.D. in his Bakersfield, California high school English class illustrates how literature can be a covert invitation to an alternative to mainstream culture. Duncan was surely primed to recognize this having been adopted by people who have been described as “devout Theosophists.” This was WAY out of the mainstream in the early 20th Century in the U.S. and even more so in a place like Bakersfield. A town that a few years later would be home to Buck Owens of Hee Haw fame.

But I found myself hoping for something more than a critique of what we have now. We live in a time in which anyone paying attention has a sense that systems are in various stages of collapse and that the “normal” we gave up for the COVID-19 pandemic lockdown is something to which we should not, return. (The steep drop in greenhouse gases — despite the huge wildfires — during the lockdown, which has put the U.S. back on track with its Paris Climate Accord goals, is one prime example.) There is no return to normal because what we had before COVID was not normal.

How does a person use poetry as an occult practice? (Which for THOUSANDS of years has been more “normal” than what we have now, incidentally.) What are the tenets of that occult practice? Perhaps this is a follow up essay, or Zurawski has written or lectured about it and I’ve missed it, but she has whet my appetite and articulated the stance-against, with great skill.