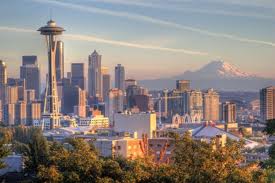 Seattle likes to pride itself on being one of America’s Most Literate Cities. I pay attention to these annual pronouncements for about 2 minutes when they inevitably make the news, or are posted on Facebook, and Seattle’s usually up there with Minneapolis and Washington, D.C. The thinking is that, what else are you going to do when it’s cloudy for the 99th day in a row? That’s also the excuse for the coffee consumption and suicide rate in Seattle, so locals can have their evening planned right off.

What interests me, however, is despite how literate it’s supposed to be here, Seattle got stuck in Modernism. Oh, we’re already way past the postmodern era in some ways, like when NPR interviewers with straight faces talk about how we’ll have a better quality of life in the future when we alter our genetics through some kind of bio-technology expertise. (Though I think that’s an extension of a modernist point of view, but a lot of people here buy that shit.) & the painters were once ahead of the curve (Tobey, Rothko). But when it comes to poetry, until recently, Seattle might as well have been in 1911. What’s interesting about this is that you might try to write that off as the West Coast of North America being a younger “civilization” than the East Coast cities of New York, Boston, Montreal, &c. But that leaves out San Francisco, with it’s Beat poets (a bridge from the modern to the postmodern) the Berkeley Renaissance (the first flowering of the postmodern on the West Coast) and the strong Language Poetry tradition. Not my cup of verse, but they (LangPoets) were trying for something different and many succeeded, though only time will sort out the wheat from the chaff there.

The notion of the West Coast as younger and less developed also leaves out Vancouver, which ate up postmodernism as soon as it started showing up there in the late 50s and early 60s with TISH and later the Kootenai School of Writing. Hell, Vancouver poet George Bowering half-jokes that Canada skipped right over modernism!

Portland had its Reed College innovators Gary Snyder, Philip Whalen, Lew Welch and Leslie Scalapino. In the past decade the Spare Room series has given that town something exciting and Emily Kendall Frey’s new “occasional salon” The New Privacy promises to be open and innovative. Powell’s Books is, of course, a legendary indy bookstore and there are many interesting Portland magazines and presses, including the self-proclaimed maker and destroyer of books, Matt Stadler’s Publication Studio. 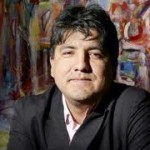 Seattle has had the UW, Theodore Roethke, Caroline Kizer, Richard Hugo, Heather McHugh, Linda Bierds, Sherman Alexie and a good many modernist poets who must be respected for their contribution, for their time in the vineyard, as it were, if not for their innovation. The UW has always been disconnected from the community outside the Blue Moon Tavern and some readings at the Hugo House, but that’s about it. Even Denise Levertov, who wrote some beautiful poems about Mount Rainier in her late life when she lived in Seattle, reverted to more of a modernist aesthetic when she lived here. Maybe it’s the water, or the legendary “Seattle Nice.” Google that, scroll past the inevitable airline ads and see what I mean by that phrase. It’s a veil for repressed anger, mostly and anger is often confused with passion and intensity, essential ingredients in innovative art. Lord, let’s not have any of that here! they (the locals) must think.

But what we lack in innovation (& there’s some of that here now, more later in this piece) we make up for in our connection to the East. There is a higher Asian population in Seattle than in East Coast cities. Two great quotes say it better than I can about this dynamic:

If I open a magazine of contemporary poetry I rarely hear John Dryden, but almost always Li Po. – Andrew Schelling

… the Pacific Coast of America faces the Far East, culturally as well as geographically… – Kenneth Rexroth

Narrow Road to the Interior

We know the Western cosmology of competition and domination has failed and is dying in a large way, perhaps taking humans (and many other species) with it. So it is only in this in this neck of the woods that we’d find someone like Sam Hamill, who has done much translation of classic Chinese and Japanese poetry, including what’s perhaps the quintessential translation of Basho’s Narrow Road to the Interior. It is a book which resonates with Seattle in so many ways. Sam’s never lived in Seattle, per se, but has been a presence here for 30+ years because he founded Copper Canyon Press in Port Townsend. His latest, Habitations shows a deep sense of place, a deep Zen aesthetic and may be the best thing he’s ever done. And his work is rich with duende, content-wise, and seems to be just this side of the line that separates modernism and post-mod.
As for readings in Seattle, you have mostly the modernist-type affairs. The city’s writing center The Richard Hugo House mostly follows a mainstream path, and has been turning toward a slam aesthetic to court younger attendees. Their Cheap Wine and Poetry Series packs their cafe every session and a spin-off, Cheap Beer and Prose has a similar popularity and in-your-face New York attitude, thanks to transplant Brian McGuigan. How cool is it that they’re sponsored by PBR? (Sing with me: What’ll ya have Pabst Blue Ribbon.) But it’s rarely made new there, but tends to be poetry as entertainment. Still, Seattle deserves a writing center and Hugo House is it for now and seems to be weathering the Great Recession. 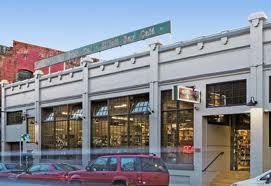 Elliott Bay Books has been re-born in a new neighborhood, Capitol Hill, but the new reading room suffers from the footsteps of book browsers on the floor above. Still the offerings have a wide range as long as there is a book to sell and it is a legendary indy bookstore and that is worthy of celebration. In many ways it is the heart of the city’s literary scene and soul. Open Books, Seattle’s all poetry bookstore, one of only three in the U.S., has a wide variety of poetics represented and the proprietors are fine poets who know their stuff. A little narrow, room-wise, but that helps create an intimate environment, so turn off your god damned cellphone before you go in there or you’ll set the sprinklers off, or so I’m told.

Seattle Arts & Lectures is the big show in town and they had Robert Creeley once, many years ago, but now gets about as innovative as Gary Snyder, Patty Smith and Martin Espada, modernists all, and quite mainstream. Of course they have to fill bigger halls, but if Seattle were as literate as it claims to be, you think there would be more daring, more of a desire to help lead the masses to something more open and challenging. Here, we claim to love diversity, so grant programs seek out the bland middle of every ethnicity, and these programs tend to turn into EEO affairs and do not push the art forward. In fact one could make a case for the opposite.

Once upon a time there was Subtext. It lasted 15 years and once graced the old Speakeasy Cafe, which is still missed. A tiff with Hugo House, their later stomping grounds, turned them to a venue that was cavernous and off the beaten path and the joy was sucked out of that series. While it lasted it did present the most innovative locals with an out-of-towner. From their blog, (https://subtextreadingseries.blogspot.com/) gathering digital dust over the last two years, here are but a few of the features:

And this only gets us into the “D’s” so you get the idea. That list looks better with time. Jeann Heuving has kept some of that innovator energy going with her adventurous Writing for their Lives program at UW-Bothell. Lou Rowan’s Golden Handcuffs Review is based in Seattle and does right by innovative local writers, including many listed above. A feature on Seattle writing a few years ago (Winter, Spring 2007-2008
Vol. 1, No. 9) was introduced by Rebecca Brown.

There still is no answer to Red Sky Poetry Theater, a legendary open mic which died in 2005 after a 25 year run, the longest on the West Coast in that time. One person said: “There are a lot of open mics in Seattle, but Red Sky’s a poetry reading.” It was a workshop for many poets, myself included, and regulars included Marion Kimes, Charlie Burks, Paul Hunter, Judith Roche, Priscilla Long, Willie Smith, Carletta Wilson, Steve Potter, Jesse Minkert, Roberto Valenza, Phoebe Bosche (of Raven Chronicles fame),  Robin Schultz, Belle Randall, John Olson, Roberta Olson, Denis Mair (a prodigious translator of Chinese poets), Margareta Waterman (& her own Oregon-based press, Nine Muses), David Whited and others.

Our own SPLAB is a venue that seeks to build community through shared experience of the spoken and written word. We have a weekly writer’s critique circle (Living Room) and the visiting poets we’ve had since re-launching in Seattle’s diverse Columbia City neighborhood include Michael McClure, Nate Mackey, C.A. Conrad, Cedar Sigo and Brenda Hillman, so I guess you can stick us in the Black Mountain meets The Salish Sea poetic territory.

The latest glimmers of hope come from three sources. The first is a brand new reading that, according to organizers happens: “in conventionally too-small spaces, occurring around Western Washington. Basements. Attics. Vans. Coffee stands. The head of a pin. Lovingly curated by Graham Isaac and Rachel Hug.” It is called, oddly enough, Claustrophobia. They’ve had only one session, but it is promising. Second is a new indy publishing house called, perfectly, Dark Coast Press, which has threatened to make a splash in the poetry world, but whose soul is that of a poet, Editor Jarret Middleton. Expect them to do big things in poetry.

The third comes from a reading series created by three guys who met at SPLAB and are, would you guess, recent transplants from “back East” as we say. New York, Philly and Virginia by way of Utah, exactly. Alex Bleecker, Greg Bem and Jeremy Springsteed have collaborated to create The Breadline.  (They chose the name months before the Occupy movement created its new Hoovervilles, or Obama-villes we might call them.) Mixing Slam, LangPo, music, Oulipo, Butoh and even the occasional Appalachian story-teller or molecular biologist, this monthly series is wildly popular and is just figuring out how to sustain  itself. An off-shoot of that reading was an homage to John Cage called Communications Silence, which was well-attended and very well-regarded in the local press. It demonstrated that there is a base here for something more real, more daring and more satisfying. Maybe now we’re growing up.

(An earlier edition of this essay appeared at: https://www.thethepoetry.com/2011/11/poetry-scenes-seattle/)