I am writing this post on July 27, 2012, after composing and documenting the first three poems I am sending in the 2012 August Poetry Postcard Fest. This was a project I conceived of and co-created with Lana Ayers. This year Brendan McBreen took on the heavy-lifting of organizing and I thank him for his efforts. At this writing 151 people have signed up for this, the 6th season of August postcards. Oh and I’ll be quoting Nate Mackey on the cards for a while in preparation for an interview with him scheduled for late August. We’ll be talking about his latest book Nod House. I tend to like to use quotes from other poets and have used Lorine Niedecker, William Carlos Williams, John Ashberry and others in past years.

It’s poor form to post cards before postcards have gotten through the post to their intended postboxes, hence the delayed posting here, but I did want to document them, as is, real warts and real toads and real plum trees and all. As always, comments are welcome. As always, having a sense of the beauty of this project is enhanced through David Sherwin’s excellent article from a couple of years back. Enjoy. 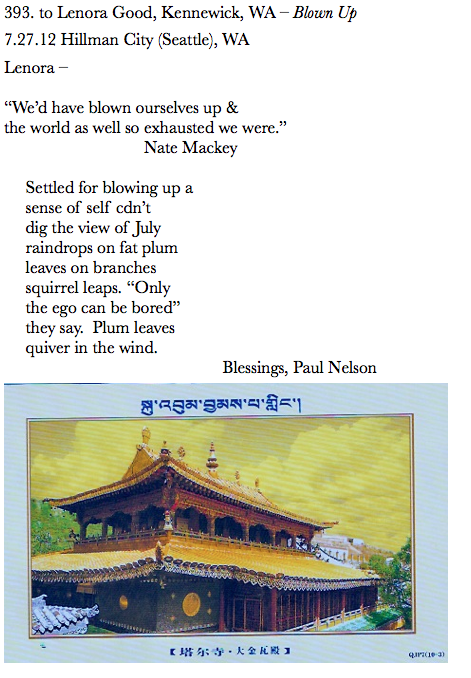