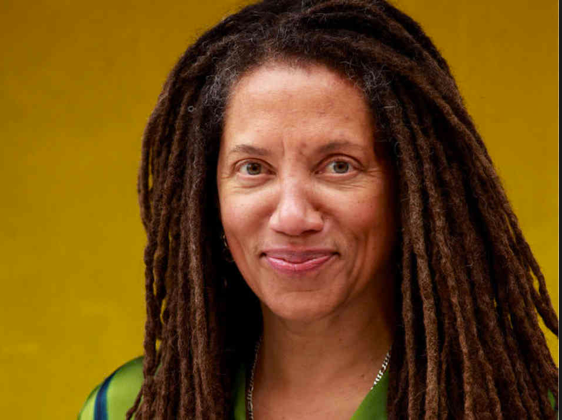 When I saw that Nikky Finney was coming to town for a reading/chat for Seattle Arts & Lectures (April 25, 2013), I thought it would be a good idea to find and digitize the interview we did in 1999. At the time she was Assistant Professor of Creative Writing at the University of Kentucky, author of On Wings Made of Gauze and Rice which was new at the time. She also was (& is) a founding member of the Affrilachian Poets. What I did not remember until re-listening to the interview was the fact that SHE was the one who first told me of the African proverb: When an elder dies, it’s like a library burns to the ground. (I had a line in one of my best poems allude to that within a few months of the interview.) I also was reminded what a wise and gentle presence she had been with me that day we sat down to chat. The original airdate was May 9, 1999.

In the introductory segment, Finney talks about her early experience as a writer and daughter of Civil Rights activists, how she was “a bookworm from early on” and the notion that she knew she could participate by being a witness to what her community was saying to the world at that time, age 9. She talked about early memories of growing up on a 100 acre farm in South Carolina, horrified by events like hog-killing time and the influence of Walt Whitman on her work, as well as other influences on her work, writers of the Harlem Renaissance, Black Arts Movement, her Grandmother and images of  the culture of her family growing up. Part 1 (7:58).

In the second segment she talked about her efforts to reconnect young people with their elder relatives, the poem Yellow Jaundice (a poem in part about her infancy, which she read), how she was born a half mile from the ocean and how that may have instilled a love of water and the sea. Part 2 (8:26).

In the third segment she discussed Rice, her book and the South Carolina staple crop, why she prefers the term enslaved when discussing Africans who had been in that situation in the U.S. south she says, specifically to tend to the rice crop in South Carolina. It was her hope at the time that her book would aid in the telling of the lesser-known side of this U.S. history, as well as shed light on the common ground between human beings. Part 3 (3:48).

In part four, Finney read the poem Making Foots, (hear audio) the very visceral poem about the history of the treatment of people who were enslaved. She discussed the poem, how it is not a contradiction to live in a place where such atrocities have happened and yet consider it her “beloved South.” She talked about how her Father, at his birth, had his ankle bones broken at his birth, as well as her Brother’s shoe fetish. Part 4 (6:04).