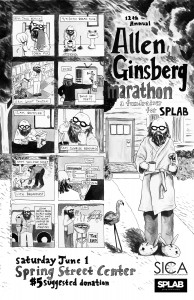 I was looking at the stats for this website yesterday and stunned to find over 5,000 hits on American Sentences, by far the most popular thing here. Thank you for your interest. I write today to share my latest harvest of these seventeen syllable poems, a form I’ve adapted from Allen Ginsberg’s use. I’ll be reading a whole bunch of them at our 12th Ginsberg Marathon on June 2. Though the marathon starts on June 1, early Sunday morning on day 2 I will host a Lightning Round where everyone in the circle reads or recites a haiku-length poem and there is a drum between readers. Ace Moore once compared it to Laugh-In. Please consider attending and sharing some of your short poems in that space.

And, as always, I err on publishing more poems than I ought to publish, but some have inside meaning and some remind me of my company and travels. In no particular order during these last few weeks, you’ll see reflected in these poems: family life, dreams, two visits to Canada, Sam Hamill, Denis Mair, Maleea Acker (in a scene now immortalized in two languages), Amalio Madueño, typos, mistranslations, mistaken words and Kwame Dawes. There are a couple of days here where the syllables were just flowing and I wrote several on each of those days.

All of 2013’s American Sentences here. See you at the Marathon.

3.13.13 – Painting of single women at a café (ala Hopper) watching cellphones.

3.13.13 – Helicopters in the gray downtown sky scattering all the seagulls.

3.14.13 – It’s either applause once the jazz tune stops or rain hitting the windshield.

3.17.13 – Zappa lapping water out of the baby’s inflatable bathtub.

3.21.13 – The after lunch cookie was too much snicker and not enough doodle.

3.25.13 – Gluten and sugar-free, but they’re carrot muffins, not carpet muffins.

4.4.13 – The only thing can stop boot crunch of stairway catkins – April rain.

4.5.13 – Her face as she tastes chocolate linguini, sees photo of beer-drinking goat.

4.10.13 – The Chinese alpaca might mean Grass Mud Horse or Fuck Your Mother.

4.16.13 – What did the giant Western Red Cedar say to the Brandon sidewalk?

5.3.13 – Pigeons just outside the café’s back door get scraps before homeless can.