One of my goals during my recent residency at The Lake, awarded by the Morris Graves Foundation, was to get to know Graves better and have a deeper appreciation for his work. Mission accomplished, in large part, because I was able to read Morris Graves: Selected Letters, expertly edited by Vicki Halper and Lawrence Fong. I barreled though the book during my time at The Lake and it turned out to be a remarkable source of imagery and language for my own poems. 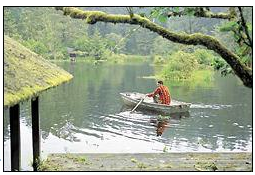 One of the projects I was working on was Pig War & Other Songs of Cascadia and I confirmed during my residency that, for my money, Morris Graves is the most important artist to come out of Cascadia. Surely in the top three with Susan Point and Robert Davidson. Influenced by indigenous and Asian wisdom traditions, an oeuvre which is centered around “a spiritual chase” and work that is stunning and transcendent, are all important factors. When you see The Lake however, you understand that his greatest work of art may be his home and the setting he created, which is evocative of a sublime Japanese garden.

Selected Letters is a beautiful look at the real human Graves was (and continues to be) and this post is designed to share some of the highlights I found in the book.

In a December 14, 1943 letter to his mother Helen Graves, he was responding to some writing on the Swiss artist Paul Klee and the materialist tendency of the culture:

How well I know that there are those who are going to be willing to judge us ONLY on how we use this time – the war years – and they are those who are able to judge (to look upon) the tangible only – the material proof of our actions – that which can be TOUCHED. They are unable to consider anything that, in a way of speaking, cannot be handled – missing entirely that aspect of the human spirit that may expand and be enriched in a most unseeable and secret way.

Four years later he would write to his mother (about his treatment by the military) that he was: sick and angered to be waved aside as an artist “nonessential” in this military-contaminated age. A few months after writing that, he wrote again to his mother about a human being of spiritual development and declared: I am an artist as part of my spiritual growth. He would also write in this December 16, 1947 letter:

Also in this period, he wrote to his brother Wallace a long description of doing a ritual for the dead in a cemetery new La Conner which really gives you a sense of Graves and what made him tick. Quite extraordinary.

One of the great examples of his ability to twist a phrase came in a 1956 letter, as he was pressed by his mother into hosting a family reunion. To his New York art dealer he said that he (Graves) ought to be congratulated for his self-control during this invasion of his space and to demand that his needs be respected: would have taken one blast of emotion that would have left a tracery of ashes where the living vine of my nervous system had been.

The book is not arranged completely chronologically, but in sections. Each section is then organized chronologically. So on page 53, there is a letter to that aforementioned New York art dealer, Marian Willard, written while Graves was incarcerated for being a conscientious objector on September 19, 1942. Here’s an example of how I was able to use the occasional Graves line in my own work. One phrase in the letter was:

I know that I am held by a certain vision, and I may prove this in part by decoding the sea and heavens.

And from the series of poems called Haibun de la Serna there is this poem: 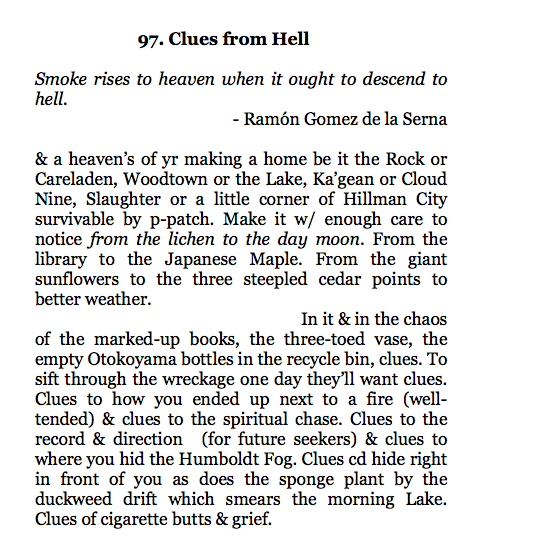 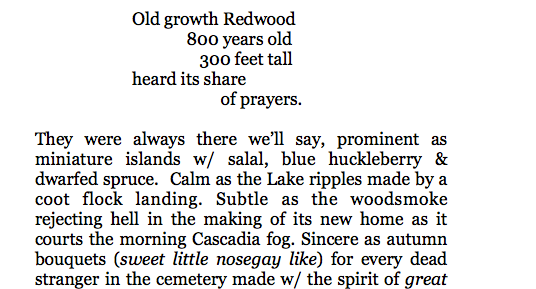 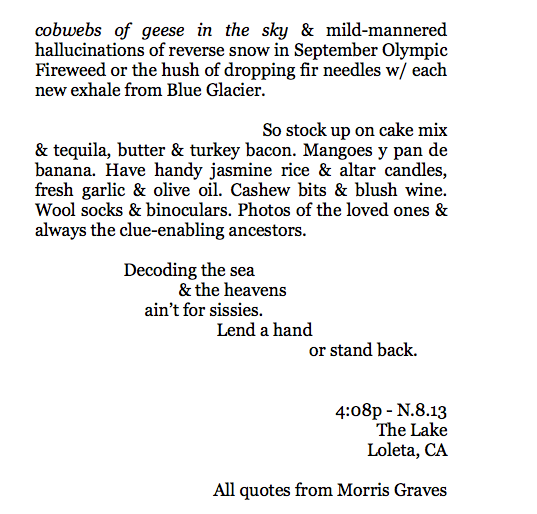 There is a passage about poet Carolyn Kizer trying to sneak in to Careladen, his Edmonds home while he was out of town and a letter or two about the famous “sprinkler incident” there when he showed the Seattle gallery and media scene what he REALLY thought of them. It is an event that has become legendary and is pure Graves.

There are examples of legitimate poems he wrote after Rexroth (and his Japanese poems) which are pretty good (and inspired my own poems in that vein) and a letter which works very well as a list poem describing the population of Loleta, California including:

He mentions his experience with LSD, taken at a much older age than the average acid head and how John Cage’s: mathematical mind takes over his poet’s mind due to Cage’s adherence to I Ching results for his compositions.

One could go on and on about the jewels in this book, and insight into his life, but the tenor of his work was as a spiritual seeker and one who did it through the practice of being an artist, something I relate to in a very deep way.

In a February 15, 1950 letter to Betty Willis he stated his life’s mission very clearly. To: find my direction and paint a record of it which might exist as added clues for anyone seeking in the same or similar direction.

That we have this record is a generous gift. These letters point similar seekers towards the direction(s) Graves aimed his own self and his work, towards as free a state (psychically) as possible, as far as possible from machines and the machine (materialist) mentality, towards the perfection of his greatest creation, his self. We need artists like Graves now more than ever, because the materialist mentality he railed against is threatening the planetary environment and its well-tuned climate system is unraveling. His work (in its various manifestations) are a glorious window beckoning others for whom the spiritual chase is of prime concern in their life and work. These letters are invaluable in anyone seeking clues for their own escape from hell.