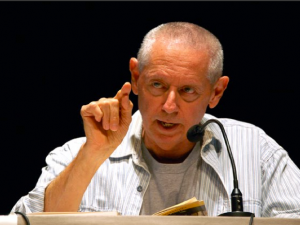 Today I’m posting the rest of the audio of an interview with legendary Cuban-American poet José Kozer, conducted by  Cal State U at L.A. Ph.D. student Mike Sonksen. (Hear the first four parts of the interview here.) Kozer here is captured shortly after winning the Neruda Award (and its $60K) from the Chilean government, the most prestigious literary prize in the Spanish speaking world.

In the fifth part of the interview he discussed academia and how it is perhaps the best life for a poet and writer. He discussed the story of how he did his Ph.D. dissertation in three months, but was not given credit for it in a dispute until many years later and, at that time, was awarded the first Ph.D. in the U.S. for poetry in a foreign language, Spanish. (Part 5, 8:42)

In part 6 Kozer told a short story about James Joyce and responded to an offer to have his work published in the Cal State U @ L.A. campus magazine with an idea to publish neo-baroque poets in Spanish and English side-by-side. (Part 6, 4:30)

In the final segment Kozer responded to a question about advice for young writers. He talked about how he learned about being a poet by hanging out with painters and composers rather than poets. He also discussed the notion of his own process and likened it to dictation, about his own diaries and his feelings about the work of Pablo Neruda, about a sample of his journals which have been described as teaching poets how to live in the 21st century and about his Neruda Award acceptance speech. (Part 7, 11:47)