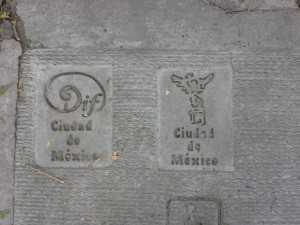 Stamped into the Sidewalk in Mexico City

I am back now for two full days from my first Subud World Congress, which was staged in Puebla, Mexico, August 1-17. People are cutting me off in traffic, I notice how irritated I get when people are driving at 12 miles an hour in a 30 mph zone and I am quite attuned to the subtle human politics involving, for example, the cold cashier at PCC, or any number of other daily occasions here which were not evident in Puebla.  It could be my poor Spanish, or the fact that I was a guest in their country, or the USD-Mexican peso exchange rate (so much in my favor and easing some financial strain) but the vibe was more relaxed, the pressure of competition (in every aspect of life here in the U.S.) was almost non-existent. I can see why Sam Hamill (and many other USAmericans) like to spend winters in Mexico and why many people (like Morris Berman) relocate there.

I had envisioned attending the World Congress in 2010, when I heard that the 2014 WC would be held in Puebla. I saw it as a chance to improve my Spanish vocabulary and, for the first time since I was a child, spend some real time in Mexico. I’d been in Canada perhaps 30 times, all of them since 1988, when I moved to Cascadia, but I’d spent no time in Mexico. 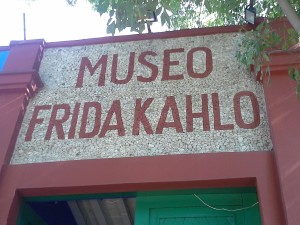 And there was one thing I wanted to do before the Congress and that was visit Casa Azul, the home of Frida Kahlo and now a museum. My poem for Frida (see here) has been very well-received over the years and now I had my chance to go deeper into her life and oeuvre. So I left my nice Airbnb room in Mexico City’s Coyoacán district and enjoyed my 20 minute walk to Frida’s house. I arrived shortly after the museum opened at 10AM, paid my entry fee and an extra 60 pesos for the right to take photos and started my tour. 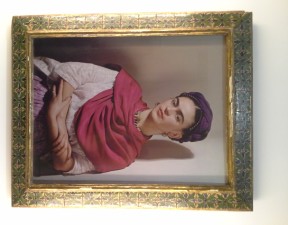 You can tell from the Frida poem I wrote in 2007 that I was a fan of her work and her life, but seeing her home and getting a deeper sense of the struggle she had just to live, let alone create timeless paintings should be a lesson to any of us when we think we have it bad. You’ve heard the phrase First World Problems? Think about how hard it is to have someone in front of us in traffic going 12 in a 30 and how hard we take it, and then think of Frida who never recovered from her 1925 streetcar accident, nor from the failed c-section and the two abortions she had. Put THAT in your medical marijuana pipe and smoke it!

Some of Frida’s work was on display at Casa Azul and just looking at her kitchen, bedroom and courtyard were rich experiences and the presence of this remarkable woman and her partner Diego Rivera, continue to be very palpable in this place. The walls DO have memory and there is a warmth you can feel if you are open to it when visiting Casa Azul. 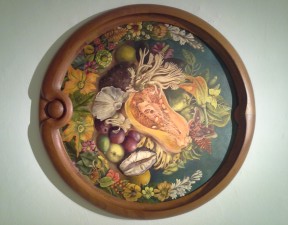 My Airbnb hosts, Sofia & Luis, had told me to make sure I visit the temporary exhibit which featured Frida’s wardrobe and it was there that it really hit me as to what she had to go through just to exist in this world. I have written a couple of postcard poems that referenced Frida, and I was told will take 6 weeks to get from Mexico to their intended recipients, but one phrase written in one of the poems was “corset warrior armor.” Indeed, the intensity of Frida’s life seemed to go up a few notches when you get a glimpse of these things. And that Frida would use it as inspiration for drawing gives you a sense of how she was able to turn these challenges into art. Surely this is akin to a shamanic act. 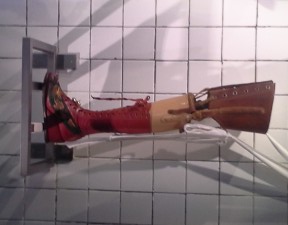 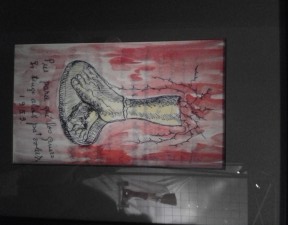 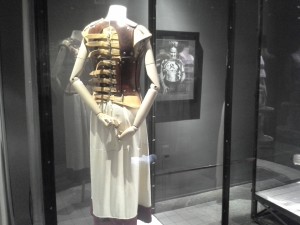 I took so many photos and a few videos, so to select out just a few for this post seems random, but at least three others merit inclusion. That Frida would have two abortions and at least one of them from a c-section (failed?) and would have a painting about the c-section was poignant, to say the least. That the painting would be unfinished would make the situation even more poignant. 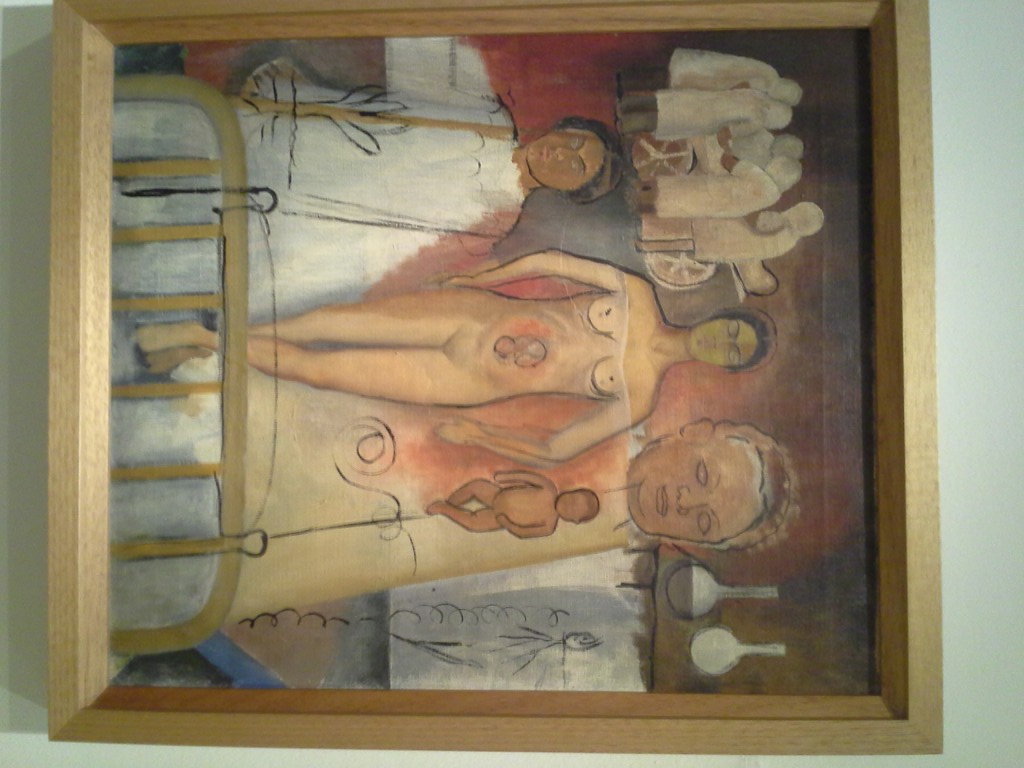 Frida and the Caesarean 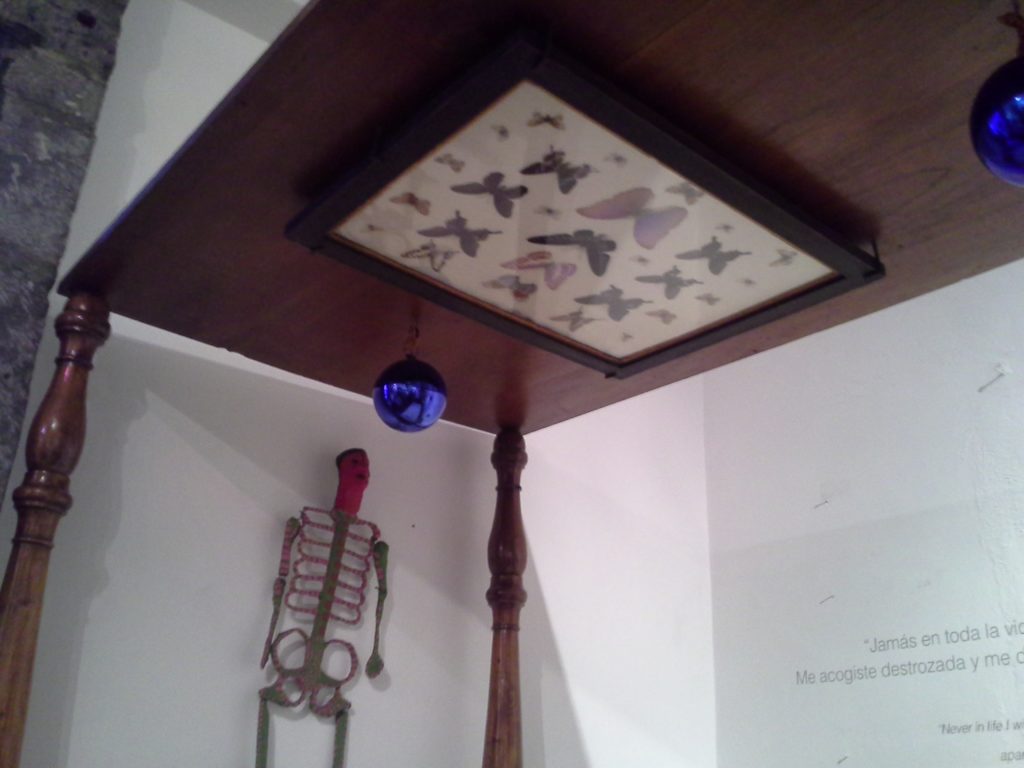