I know these posts can be seen as click bait, but there is something weird and particularly USAmerican about all the fuss being made about our favorite Grandson of a Pimp and Bait-racer, Tronald Dump.

#1) That with his call to have Muslims register or to ban Muslims from entering the U.S. he is essentially the mirror image of the fundamentalist Muslims he claims to oppose, makes me want to call him Vanilla ISIS.

#2) Jeb Bush is among those suggesting that Rump is running a “false-flag” campaign to make Rs look bad and benefit the candidacy of Hillary Rodham Clinton. HRC would never do something that calculated and sneaky, right?

#3) Great article on the insult war Spy Magazine had against him in the 80s and 90s calling The Tronald, among other things the “Short Fingered Vulgarian.” 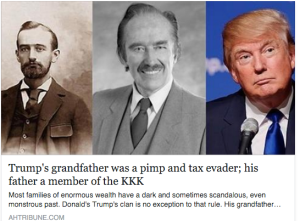 #4) The dirt on his family is coming out again, including the facts that his Grandfather made his fortune being a pimp was a draft-dodger who was kicked out of Germany and his father was an unrepentant member of the KKK who practiced racist policies as a NYC landlord.

5. The ratio of coverage by ABC World News tonight to Tronald Dump as compared to Bernie Sanders: 81 to 1.

6. That his campaign would resonate with so many USAmericans says so much about the levels of ignorance rampant in this country, but isn’t this the kind of thing one sees at the end of all empires?

7) This brilliant op-ed piece by Michael Meade is a must read for anyone, like me, fascinated by the rise of The Tronald and features paragraphs like:

The word “trump” comes from old card games where a person could win by playing a card that upstages and wipes out all others; thus a “trump card.” Of course, Mr. Trump is no stranger to casinos and gaming houses or to personally gambling on becoming a ‘huge’ winner. He builds towers that rise above other buildings as if literally trying to “trump” his rivals and lord it above everyone.