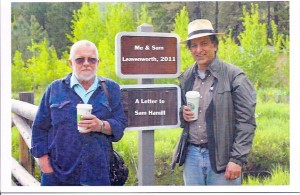 When I was asked for writing about a writer by Thomas Walton of Pageboy Magazine, I immediately thought of my homage to Sam Hamill, written in 2014 and written after the Kenneth Rexroth poem “A Letter to William Carlos Williams.”   When presented to Sam, he loved it and immediately recognized it as what I’ve come to call a Cover Poem. He felt I was copping his trick, but I came to the technique organically and via my music background more than anything else. (I was in radio for 26 years and was a D.J. for a large part of that time.) My poem for Sam (“A Letter to Sam Hamill”) is the same poem Rexroth wrote, but with the material updated to reflect a different person. And that it was accepted by Pageboy right away was a good feeling too. 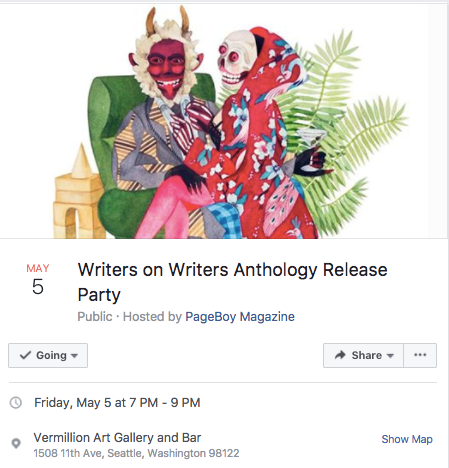 Thomas Walton‘s magazine is well-done, always features beautiful art work and interesting writing, with an emphasis on less conventional work, which suits me. (Listen to my 2013 interview with him and Sierra Nelson about the magazine here.) Other poets featured at the release party include: Sarah Koenig, Patrick Milian, Jeanine Walker, Amber Nelson and others.

And it is events like this that make a literary community vibrant. There are many literary projects in Seattle and I am drawn to the ones which are partial to the outside, those with the duende, the experimental &c. It is why reading last week at Margin Shift was so important to me. Margin Shift has taken the mantle of the “most outside” reading series (what I called last Thursday “the meatiest”) and, with the demise of the Subtext Reading Series, it is critical to have something that recognizes a higher literary “degree of difficulty” because the literary culture here in Seattle can be pretty risk-averse. I guess that is true everywhere, but it surprises me sometimes how “narrow” Seattle is, to flash back to Rexroth again. It has been eight years since Subtext’s last reading and I think Margin Shift has been going on for 6 or 7, so you see how the baton was handled and kudos to all who’ve kept Margin Shift going, Deborah Woodward and Matt Trease, currently, both of whom are voracious and intelligent readers, which helps.

So, thank you Pageboy and Thomas Walton. If you are looking to expand your own literary horizon, consider attending on May 5. And buy a copy of the magazine for Christ’s sake!