In my last (non-postcard) post, I made reference to a review in B.C. Bookworld about a book on climate change from a Canadian author who foresees the huge invasion in Canada of USAmerican “climate refugees” who will be fleeing the U.S. South and Midwest when those lands, due to climate change, no longer support life, and coastal areas like New York City, whose sewage systems will be inundated with sea water allowing cholera and typhus to ravage the local population. 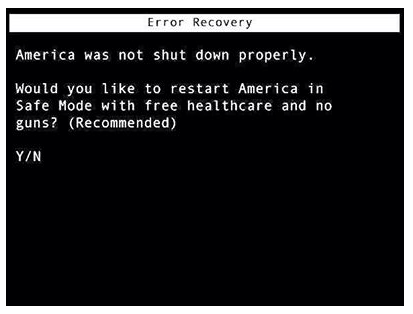 That post was prompted by the shutdown of the U.S. Federal Government by a small percentage of radical right-wing Teahadists, who act as if they have already lost the battle for the soul of this country, suffer from what some are calling “epistemic closure” and feel therefore that they have nothing to lose.

And while USAmericans debate the latest drama coming from politicians who, left and right wing alike, are increasingly out of touch with those they purport to represent, real threats affecting all life as we know it continue to gain momentum. Climate change is the biggest, and a quite credible reporter Thom Hartmann, has produced a new short on the subject that really hits home. I had the opportunity to interview Hartmann and found him to be intelligent, a solid scholar and articulate guest. The short film called Last Hours can be seen here:

Also think of the Dust Bowl and the Grapes of Wrath. I went into this notion of climate refugees in a haibun that is part of a series called Haibun de la Serna. It was a poem that celebrated the return of King Salmon to the Elwha thanks to the largest dam removal project in North America, as well as Cascadia culture that hopefully won’t be messed up when the bible belters flee the hellhole they helped create by supporting politicians who fiddled around while the planet burned. 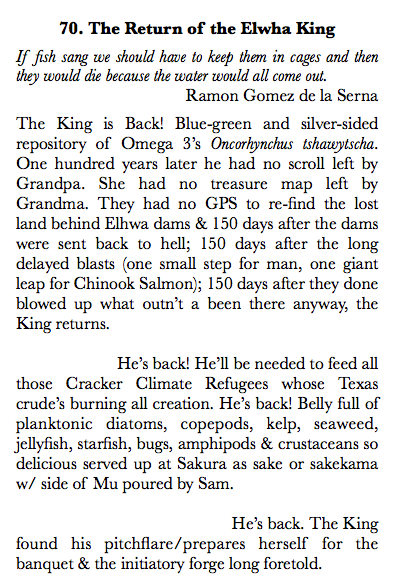 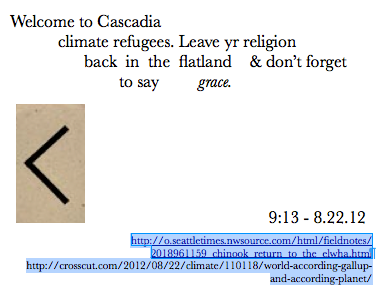