I love this notion of pre-bedtime suggestions. I have been doing that the last few months, or more based on the latest poems to be posted here from the ongoing series After The Japanese.  I have been posting the poems in hunks of four the last few months and it appears they will get me to about the time of the August Poetry Postcard Fest which will begin July 4. Details on that in the last post.

The suggestions lately have been based on a practice of gratitude. I’d think about the day about to end and ask what happened that I felt grateful for? With the success of the recent Cascadia Poetry Festival and the connections made or deepened there, the publication of the Make It True: Poetry From Cascadia anthology, the ongoing happiness of my little girl (Ella), the 24th birthday of my successful journalist daughter, the ongoing success of the Spring Street Center‘s rental business that I manage, there is much to run through my mind on any given late evening.

Also lately I’ve rediscovered the notion of healing sounds. This comes out of the work of Mantak Chia, who might be best known for his work with tantra, a hugely misunderstood practice in North America. The sounds are:

Make sure to do the sounds in the proper sequence of the Lung sound (Ssssss), Kidneys (Wuuuuu), Liver (Shhhhh), Heart sound (Hawww), Spleen (Whooooo) and Triple Burner (Heeeee). If you feel that a particular organ or its associated symptoms are bothering you, then increase that individual sound without going through the entire sequence.

I find it interesting that when someone is speaking too loudly, you say Shhhhh! which is also the sound for the liver, which in Chinese medicine is associated with anger. My poem Nine Sonnets for Pop goes into some of the liver heat/anger connection in his life and, by extension, mine.

So the latest After The Japanese for your dining and dancing pleasure, with odd references to Modest Mouse and Bucky Fuller. Or in the words of Z.Z. Top: Hawww Hawww Hawww. 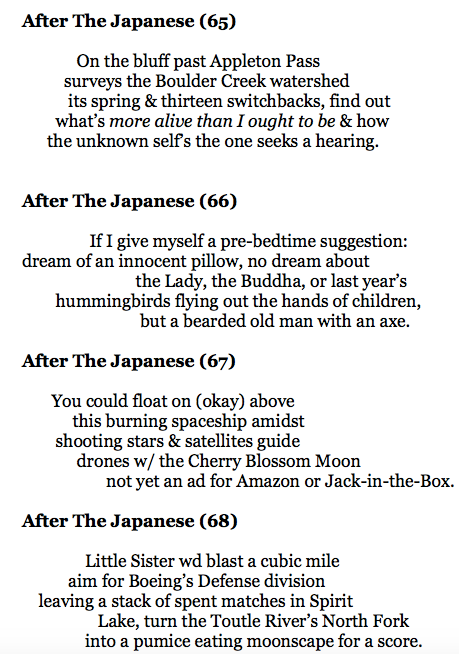