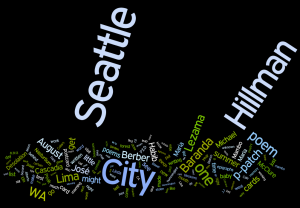 This is a traditionally a week of looking back at the previous year and rather than present those posts from 2013 I wrote that I liked the best, I am letting my web stats program Jetpack have its say. I am not counting hits from pages like American Sentences and Organic Poetry, which are not posts, but get a lot of visits during the year. Here then are the top ten posts on this blog from 2013 in case you may have missed something. As always, comments are welcome:

5. https://paulenelson.com/2013/07/20/how-to-write-a-postcard-poem-10-steps/ My approach to participating in the annual postcard festival.

4. https://paulenelson.com/2013/03/23/line-has-shattered-van-po-conf/ A report after attending the Vancouver screening of this wonderful film about what may be the most influential poetry conference in the history of Cascadia.

3. https://paulenelson.com/2013/01/31/residency-at-graves-foundation/ A post after I was informed that I was awarded the residency, which happened in November 2013.

1. https://paulenelson.com/2013/06/22/august-postcard-poem-fest-returns/ A call for the annual postcard fest. Subscribe to this blog for an email when the 2014 call goes out.